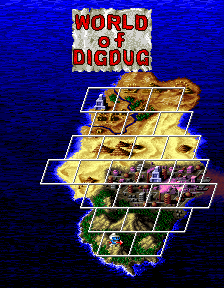 The first round for this game is similar to that of the original Dig Dug, while the second one introduces Big Rocks (that will go straight to the bottom of the screen when loosened); the third one also introduces Neo Fygars who can move, breathe fire and deflate if not fully inflated faster than the normal ones. The fourth round introduces Cosmo Balls (of Cosmo Gang: The Puzzle), while the fifth one introduces Unicorns, who can charge towards the Dig Dugs - and the sixth one also introduces Neo Pookas, who can once again move and deflate if not fully inflated faster than the normal ones. The seventh round introduces Explosion Robots (and metal pipes which cannot be dug through), while the twelfth one introduces a Big Pooka; the text "USE A BLAST!" will appear on the screen, and you shall have to wait for an Explosion Robot to emerge from one of the four pairs of double doors in the corners of the room, pump him up while the Big Pooka is in his range, and explode him in order to register three squares' worth of damage on his life bar (which is comprised of sixteen squares, so you'll have to do it six times to defeat him, but once you do it four times, he will glow red and speed up. He is worth 20000 points).

The fourteenth round introduces the Black Dig Dugs, who can dig through the dirt (just like your own), and try to pump them up until they explode (if they start doing so, or your own pumps catch on theirs, you will have to press the button repeatedly, to prevent yourselves from exploding or shake them off); the fifteenth one also spells out DIG DUG. The twentieth round also introduces metal plates (which again cannot be dug through) - and the twenty-fourth one introduces a Big Fygar (the text "USE THE RAY GUN!" will appear on the screen and you will have to collect the unlimited-ammunition Ray Guns in the top-left and top-right corners of the room and use them to register half a square's worth of damage on his life bar while watching out for the bursts of flame from the flame-thrower built into his robotic body). As the life bar is again comprised of sixteen squares, you will have to shoot him thirty-two times to defeat him, but once you have done it twenty-two times, he will again glow red and speed up; he is worth 30000 points. When the game returns to the overworld map, another island will emerge from the ocean to the left of the inceptive one - and this one will form the basis of the next six rounds (25-30).