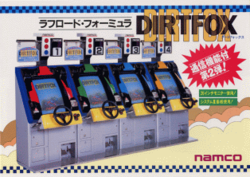 Dirt Fox (ダートフォックス, lit. Dāto Fokkusu), is a racing arcade game, that was released by Namco in 1989 exclusively in Japan; it runs on Namco System 2 hardware, and allows up to four players to play simultaneously, when four cabinets are linked together (much like Namco's own Final Lap, which was released two years earlier, may allow up to eight players to play simultaneously, when four two-player cabinets are linked together). The gameplay is similar to that of Data East's Burnin' Rubber, and Bally Midway's Spy Hunter, only without the jumping and shooting that both of those driving games involve.

Each of the players must take control of a colour-coded car (red for Player 1, green for Player 2, blue for Player 3 and yellow for Player 4) which are competing in an off-road race; they are given a preset amount of time in which to complete each of the track's six sections, and for each section of the track that is successfully completed, the players' time gets extended. However, if any of the players do not manage to successfully complete the current section of the track before their time runs out the game will, like in other Namco multiplayer racers, instantly be over and the race will continue without them.