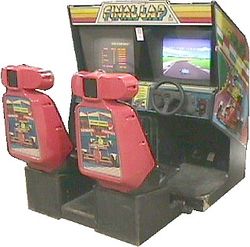 This guide is for the original arcade version. For the Famicom version, see Final Lap (Famicom).

Final Lap is a racing arcade game that was released by Namco in 1987 and licensed to Atari Games for U.S. manufacture and distribution; it was the first game to run on the company's then-new System 2 hardware (two Motorola 68000 microprocessors running at 12.288 MHz, a Motorola M6809 running at 3.072 MHz, and a Hitachi HD-63705 running at 2.048 MHz), and it was also the first game to allow up to eight players to play simultaneously when four two-player sitdown cabinets are linked together.

Players take control of either the Williams, McLaren, March, or Lotus cars in a Formula One race on the Suzuka Circuit; for the single-player mode, the player's score is based on how far his car travels until the time runs out or he completes four laps of the circuit. Hitting another car or a billboard does not cause your car to explode like it did for Namco's own Pole Position games (the second of which also showcased the Suzuka Circuit), but it will send you or the other car spinning off the track which can cost you time - and in the multiplayer mode, up to eight players can race simultaneously (which can allow for better lap times because the plain green CPU-controlled cars appear less frequently).

This is the first game in the Final Lap series; it was followed up with six sequels: Final Lap Twin (PC Engine, 1989), Final Lap 2 (Arcade, 1990), Final Lap 3 (Arcade, 1992), Final Lap R (Arcade, 1993), Final Lap 2000 (WonderSwan, 2000) and Final Lap Special: GT & Formula Machine (WonderSwan Color, 2001). Four Trax (1989) and Suzuka 8 Hours (1992) also showcase similar gameplay to this series (but feature quad bikes and motorcycles instead of racing cars) - and a single-player upright version of this game, called Final Lap UR, was also released in 1988. Namco converted the game for play at home for the Famicom in a stripped-down version of the game, featuring multiple tracks.

In 1990, Philip Morris, the tobacco conglomerate, filed a lawsuit for copyright violation against Namco on account of this game (in addition to Sega, on account of their Super Monaco G.P. game), because both games feature Marlboro billboards (which can be found on both the real Suzuka Circuit and Circuit de Monaco tracks); Morris was under investigation at the time for the Altria Group's role in underage smoking, and the appearance of one of its brands in games aimed towards children and teenagers did not help their image. Namco were forced to pay a cash settlement, while Sega had to edit their game to remove all Marlboro billboards - however, the earlier versions of Super Monaco G.P. are still playable in more recent versions of MAME.