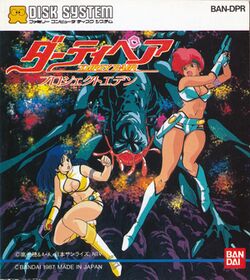 Dirty Pair: Project Eden is an action game developed by Bandai and published for the Family Computer Disk System in 1987. Dirty Pair is a series of sci-fi comedy light novels written by Haruka Takachiho that was later adapted into anime and manga versions. The series focuses on a team of trouble consultants in the Criminal Investigation section of the World Welfare Works Association, named Kei and Yuri, who have a reputation for leaving a trail of destruction behind them, for which they are known publicly as the "Dirty Pair". Despite the popularity of the Dirty Pair series of anime and manga productions, this is the only video game ever based upon the Dirty Pair license; its incredibly poor quality may in fact have something to do with that.

This game is based upon the Dirty Pair movie of the same name, Dirty Pair: Project Eden. In the movie, Kei and Yuri are sent to the planet Agerna to investigate a feud between two opposing factions. They must find out why strange creatures are attacking test plants for refining vezorium, a new metal by which all intergalactic space travel is made possible. When sent to investigate a feud happening on a mining asteroid held by two factions. Kei and Yuri find that there's more happening than they realize when a mad scientist, Professor Wattsman, makes a discovery that he plans to exploit to his own needs. He is attempting to create a master species that will dominate and replace human beings.

The game only loosely follows the plot of the movie. In the single player game, players control the more ladylike and controlled Yuri, while in the two player simultaneous game, the second player has control of the more impetuous Kei. The game is composed of four stages. The first two stages take place in the Urdas plant lockout, and the last two stages take place in Professor Wattsman's research facility. Stages 1 and 3 are side scrolling action stages, which are divided into four sections. The stages scroll automatically, and if the player ever dies, they must start all the way back at the beginning of the section they died in. Stages 2 and 4 are large maze like buildings which contain disks that the player must collect. Door open by various means, some by blasting, some by key card, and others will only open in a bomb blast.

Overall, this game is incredibly difficult to play, with sluggish controls and unforgiving enemy behavior, on par with Transformers: Convoy no Nazo. It takes a great deal of patience to play through the side scrolling sections, and to make it through each section without getting hit. The building stages are very monotonous, and appear never ending. Maps have been provided in the gallery below for those who wish to tackle this game.