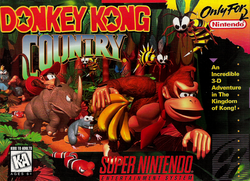 Donkey Kong Country is a video game developed by Rare and Nintendo, featuring the popular arcade character, Donkey Kong. It was released for the SNES and Super Famicom in 1994, 11 years after the last Donkey Kong game, Donkey Kong 3. It was ported to the Wii Virtual Console on the Nintendo Wii on December 8, 2006 in Europe and Australia, December 12, 2006 in Japan, and February 19, 2007 in North America. On November 25, 2012, for reasons unknown, Donkey Kong Country and its sequels were delisted from the Wii Virtual Console, but on October 30, 2014, the games were relisted in Europe and Australia. Around the same time, the games were released on the Wii U Virtual Console in Europe and Australia, in Japan on November 26, 2014, and in the United States and Canada on February 26, 2015. For handhelds, Donkey Kong Country was ported exclusively to the New Nintendo 3DS Virtual Console in March 2016. It is one of the 21 games included on the Super NES Classic Edition and was made available on Super Nintendo Entertainment System - Nintendo Switch Online for the Nintendo Switch on July 15, 2020. It was produced by Tim Stamper. This was the first Donkey Kong game that was not produced or directed by Shigeru Miyamoto.

This game can be credited as the original Donkey Kong game, as it was the first that allowed players to control Donkey Kong. In addition, it helped to define the characters of the Kong family and create the back story that we know of now.

For more details on this topic, see Donkey Kong Country/Story.

King K. Rool and the Kremlings have stolen Donkey Kong's hoard of bananas; now he must recover the stash. His banana hoard was located just in a cave underneath his house; somehow nobody noticed the giant bananas being transported. Donkey Kong has the special help of his nephew and best buddy, Diddy Kong, who idolizes DK. Cranky Kong and the other Kongs (Funky Kong and Candy Kong) lend a hand along the way.

Handheld:
Other:
Retrieved from "https://strategywiki.org/w/index.php?title=Donkey_Kong_Country&oldid=956023"
Categories: