The final battle in the game is the battle against Vegeta. Vegeta is an evil Saiyan, as opposed to Goku. Though Goku's fate was to be a Saiyan similar to Vegeta, he grew up on Earth. Now Goku must fight for what is right, as the fate of the planet is up to him. This is your time to use all of the moves you've learned and go all out.

Vegeta can be very intimidating. You should still have more Ki than him, but his HP is 9,999. Unlike the other battles though, this battle doesn't end when you hit 0. Though the battle can be very tough (since it's the "final battle" it should be the hardest in the game), the battle actually ends when you reach 500 HP. The second part of the battle involves a small cutscene. After the cutscene, the battle will get a little easier, but don't let your guard down. And remember that he may seem intimidating, but the battle ends when you reach halfway to 0. 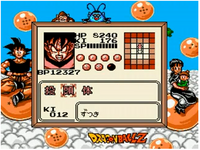 Remember to go all out in this battle. Use your Ki to pull off the most devastating attacks you have. Also remember to use the techniques and moves you've learned throughout the game. Chances are the moves you've learned are very useful and powerful, not to mention hard to defend. If you have all of the moves unlocked, you can also use the Super Kamehameha when you're close to defeating him. It makes a good finishing move. If you have 7 moves to use by now, you shouldn't have much trouble. 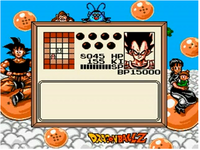 Defending will be very challenging, but although he is strong, he doesn't defend as crazily as Nappa. This part of the battle shouldn't be too annoying. Just keep doing what you've always done, and choose the one you're more comfortable with. You can either block or dodge. Always remember that, even when you don't think you'll be able to block or dodge, you should try. Trying is better than nothing.

Before you'll be able to reach that 500 HP mark, Vegeta will go through transformation, and become a giant ape. Though he looks a little menacing, because his HP is low and other than the strong attacks, it can sometimes be considered easier than opposing the original Vegeta. You'll start fighting Ape Vegeta at about the 3000 HP mark. Though Great Ape Vegeta does have very powerful moves, he isn't the best at defending.

After defeating Great Ape Vegeta, the battle will be complete. You will then be taken to the ending screen and the credits will start rolling, notifying that you've defeated the final boss and successfully completed the game.