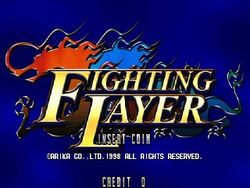 Fighting Layer (ファイティングレイヤー, lit. Faitingu Reiyā), is a one-on-one fighting arcade game that was developed by Arika and released by Namco in 1998, only in Japan; it runs on Namco System 12 hardware and has a total of sixteen different fighters. The eleventh and twelfth of these fighters had also previously appeared, in another Arika-developed one-on-one fighting arcade game, Street Fighter EX2 (also of 1998) - part of Capcom's Street Fighter series.