Fist of the North Star (NES)

Fist of the North Star (NES) 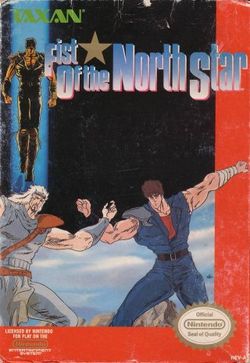 The game is based on the second anime series, Hokuto no Ken 2, and covers primarily the Imperial Capital arc of the series, where Kenshiro faces off against the Gento Kōken fighters. Because the series was still airing when the game was initially made, the game only goes up to the beginning of the Land of Asura arc. The final boss is the Nameless Asura, who was only a minor villain in the series.

The North American version was ported by Taxan and released in the US in 1989. It is simply titled Fist of the North Star and should not be confused with the first Hokuto no Ken Famicom game, which was unreleased overseas. Despite being based on Hokuto no Ken 2, the North American cover depicts Kenshiro fighting against Toki, who appears only in the first anime series.

By choosing "VS start", you can challenge the first four bosses without any mook fights.
The names of Killing method are only shown in Japanese version.