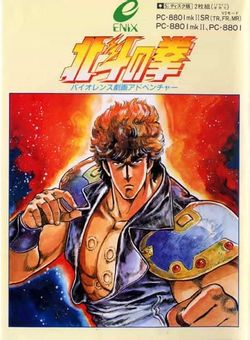 Hokuto no Ken: Violence Gekiga Adventure (北斗の拳 バイオレンス劇画アドベンチャー, Hokuto no Ken: Violence Gekiga Adventure?) is a graphic adventure game developed and published by Enix in 1986 for Japanese home computers. It is the first game based on the Hokuto no Ken manga series, which at the time was in the midst of serialization in Weekly Shonen Jump. The story follows Kenshiro, accompanied by young thief Bat, as he journeys through the post-apocalyptic wasteland of 199X in search of his fiancée Yuria, who was stolen away a year before by his rival, Shin. This story is mixed with an original one, as the duo come across a town with inhabitants that are unique to the game.

To progress through the game, commands are selected from a menu, allowing you to move from one place to another, speak to civilians, pick up items, use items already in your possession, etc. Bat follows the commands and offers his commentary. Occasionally, Kenshiro will come across an enemy. If he strikes, the enemy is engaged in the game's battle system, called the "vital point system" (秘孔システム, "vital point system"?). These enemies can only be defeated by hitting the correct pressure points (or "vital points"), which are discovered by finding clues beforehand.

While gameplay differs in some areas, it is strongly inspired by Portopia Renzoku Satsujin Jiken, which was developed by the same team within Enix. Bat has a role similar to Yasu in Portopia, assisting the main character based on his commands. The command system itself is similar to the menus of the Famicom version of Portopia, though rather than scrolling through options, the commands correspond to numbers on the keyboard, making for much quicker access than typing (as was necessary in the computer version of Portopia).

In the year 199X, the world was wrapped in a nuclear flame. The earth became barren and the seas evaporated, and it looked as if all living things were dead. However, humanity prevailed, though the strong survived by preying on the weak. This is where Kenshiro, the successor of the deadly Hokuto Shinken martial art style, comes in, as he vows to put a stop to this vicious cycle.

One year ago, Kenshiro was prepared to start a new life with his fiancée Yuria when the successor of Nanto Seiken, Shin, made his appearance. Kenshiro attempts to avoid a fight, as one between the Fist of the North Star (Hokuto) and that of the South (Nanto) would be against the teachings of his master. Shin dismisses those teachings as old-fashioned, and attacks Kenshiro in order to steal Yuria away from him. He leaves his mark on Ken in the form of seven scars on his chest, and threatens to kill Kenshiro if Yuria doesn't tell Shin that she loves him. She does so to spare him, and the two walk away from a defeated Kenshiro.

Back in the present, Kenshiro resolves to defeat Shin and recover Yuria, and as Kenshiro and Bat enter the village, the game begins.