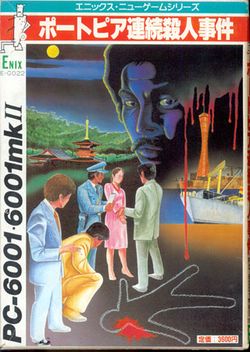 Portopia Renzoku Satsujin Jiken (which translates to Portopia Serial Murder Cases), started out as the first text adventure ever made for early popular Japanese computers. It was designed by Yuji Horii. The game had a crude text parser that required players to type two words like "get" "book" to do all of you actions. Screens were drawn with lines and fills which took some time. As a detective, it was your job to gather clues and discover the identity of a victim's killer. The game was a huge hit and the inspiration for all future Japanese visual novels.

In 1985, Yuji Horii wondered how well a graphical text adventure game could do on the Famicom. He ported his game to the system, made a few minor tweaks to the store line, changed the input mechanism to a series of menus, and added one new feature: first person mazes inspired by a favorite game of Horii's, Wizardry. Portopia sold very well on the Famicom, proving that Japanese gamers were as interested in strategic thinking games as they were with faster paced games of skill. The success of this game led to Enix giving Horii the green light to start a very special project of his, known as Dragon Quest. Although it is a completely different style of game, fans of the ongoing Dragon Quest series have this game's success to thank for the series' existence.

It's 1982 in Kobe City, Japan. The newly completed man-made Port Island in Kobe harbor is now a permanent fixture on the horizon. Evidence of the 6 month long PORTOPIA '81 Expo remains on the island, but the large crowds of visitors have all gone home and life is starting to return to normal throughout the Kansai region.

But then it happens. For no apparent reason, a successful banker named Kouzou was found dead in his house, the Yamakawa Mansion.

Two of his employees, his secretary, Fumie, and the security guard at the mansion, Komiya, found him dead inside the mansion's study, with the only door leading to the room locked tight. When they forced the door open to get inside the room, his lifeless body was found lying on the floor with a single stab wound to the neck and the murder weapon lying close by.

At first glance the evidence seemed to indicate Kouzou had taken his own life. But the facts in the case didn't add up. Kouzou was a successful business man and things had recently been going well for his company. There really didn't seem to be a reason for him to commit suicide.

The police are beginning to suspect foul play. This is where you come in. You are a detective. One of the best...

Along with your faithful assistant, Yasu, it is up to you to figure out who killed Kouzou, arrest them, and bring this investigation to a close. But it won't be easy. It will take all your wits and a little luck to follow the clues that bring the case to its exciting conclusion. Be careful, because the killer is still on the loose, and until caught, no one is safe... 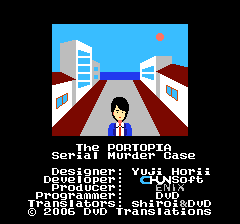 On June 15, 2006, the ROM-hacking translation group know as DvD Translations released a patch that can be applied to the original Japanese Famicom ROM of the game, and translate it into English. They began the project around January 9, 2004. The size of the Famicom program was the largest allowed on the Famicom without the use of memory mappers, so there was no way to increase the size of the game. As a result, replacing all of the text was difficult since English text tends to take up more memory than Japanese text, so the ROM was expanded using a mapper, the first NES translation to do this. In order to aid players with this challenging game (in which some geographical familiarity with Japan is helpful), DvD translations provided players with a zoomed-in map of the areas of interest in Japan. On October 31, 2010, a new Rev. B version of the patch, released alongside a new fully translated html manual, has a vastly improved script. They can both be found at here along with, for those who need it, a quickest possible game walkthrough. You know you are playing the new version if on the bottom of the title screen it says Rev. B.