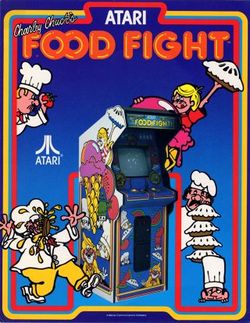 Food Fight was one of two games developed by General Computer Corporation for Atari as the result of an out of court settlement between the two companies, the other being Quantum. GCC started out by developing upgrade kits for Missile Command which they sold to arcade owners without Atari's permission, so Atari sued. Food Fight was a "cute" game that pit a hungry young man named Charley Chuck against four hostile chefs.

Charley's one and only goal, every stage, was to run from the right side of the screen over to the ice cream cone that was waiting for him, slowly melting, on the left side of the screen. Because the ice cream continued to melt, Charley only has 32 seconds to reach it before the ice cream is all gone. Between Charley and the cone are stockpiles of food and some angry chefs who are determined to prevent Charley from reaching the ice cream for some very unknown reasons. Charley will automatically pick up any food that he passes by, and chuck it in his current direction. The chefs can do the same. If Charley hits the chef, they are taken out of play for a while, but if a chef hits Charley, that's one lost life.

Food Fight employed a special 360° analog joystick that gave the player a wide selection of directions to move and throw food in instead of the typical 8 directions. It also made instantaneous about-faces difficult to perform. Nevertheless, Atari ported it to two of their home systems, the Atari 7800 and the Atari XE systems in 1987 and 1988 respectively. The XE version (which runs on all XL and XE home computers) is a bit poor as Charley runs far too quickly across the screen, but the 7800 version is hailed as a fabulous conversion, and among many 7800 owners' favorite games. An unlicensed clone of the game was developed for the TRS-80 Color Computer in 1983 called Foodwar. 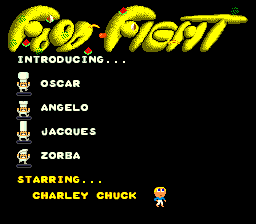 How many ice cream cones can Charley Chuck eat? He'll soon find out. As an ice-cream cone melts on the other side of the screen, Charley Chuck just naturally has to go for it. But he must get past Oscar, Angelo, Jacques, and Zorba, four chefs who unexpectedly pop out of holes, chase Charley Chuck and throw food at him. They're all out to stop Charley Chuck if he isn't fast enough.