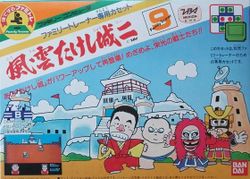 Fuuun! Takeshi Jou Two (ファミリートレーナーシリーズ9 風雲たけし城 二, Family Trainer Series 9 Fuuun! Takeshi Jou Two?, lit. Situation! Takeshi's Castle Two) is the ninth game developed and published by Bandai in 1988 for use with the Family Trainer pad, known in North America as the Power Pad. It is a continuation of the eighth game, Totsugeki! Fuuun Takeshi Jou, which is based on the Japanese Television series game show/contest Takeshi's Castle, which aired between 1986 and 1989 on the Tokyo Broadcasting System.The player must fight through a series of physically-demanding and bizarre challenges using the Power Pad accessory in order to reach a showdown with the fortress' owner, a fictionalized version of Japanese entertainer "Beat" Takeshi Kitano. It was only released in Japan, and was never translated for release in the United States.