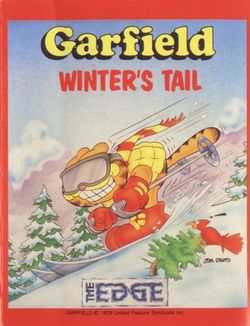 Garfield: A Winter's Tail is an action game that was developed and released by The Edge upon the Sinclair ZX Spectrum, Amstrad CPC, Commodore 64, and Commodore Amiga, in 1989; as the name suggests, it is a follow-up to Big, Fat, Hairy Deal, which was released in the previous year, and again based upon the United Feature Syndicate cartoon strip of the same name (and to a lesser extent the Film Roman television series it had also begat in 1988, that was into its second season by this time).

This is from the back of the cassette's (or disk's, in the case of the Commodore Amiga version) inlay card, the front of which is shown in that image to the right (Garfield wears a ski jacket, and goggles); it also has an alternative title, "A Midsupper Night's Dream" (a pun on A Midsummer Night's Dream):

The world's favourite feline is back...
as the Ski Animal!
GARFIELD has fallen asleep in front of the
ice box and starts to dream.
He dreams of the Alps, and that reminds him of
Northern Italy - which reminds him of LASAGNA! (hum, sounds like
lunch...). As the dream unfolds GARFIELD remembers that
just round the other side of the Alps is Switzerland - reminds him of
Chocolate! (hum...sounds like dessert). But once in the chocolate factory
he discovers the legendary "Chicken that Lays the Chocolate
Eggs"...and from there the chase to catch the chicken is on!
This superb sequel to "Big, Fat, Hairy
Deal" is really four games in one. With GARFIELD skiing,
skating, and facing the trials of dealing with Odie (the world's
dumbest dog) in this unique blend of both pure arcade-style
and adventure/puzzle solving game.
Yet another must for computer game playing
GARFIELD fans everywhere!
© United Feature Syndicate Inc. 1989

It is also worth noting that that "Chicken that Lays the Chocolate Eggs" is not Roy, who once referred to himself as the "prankster gangster" in the second part of the show's twenty-second episode (which was new at the time of the game's release); it is not Booker or Sheldon either (as the latter was just a chick who had not completely hatched, and he happened to have another shell under his initial one!).