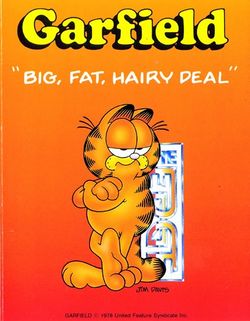 Garfield: Big, Fat, Hairy Deal is an adventure game, that was developed by Softek International for The Edge and released on the systems of Sinclair ZX Spectrum, Amstrad CPC, Commodore 64 and Commodore Amiga in 1988; it is based upon the United Feature Syndicate cartoon strip of the same name (and, to a lesser extent, the Film Roman television series it begat which premiered around the time of its release even though Garfield's girlfriend Arlene never featured in it during its six-year run).

This is from the back of the cassette's (or disk's, for the case of the Commodore Amiga version) inlay card, the front of which is shown in the image to the right (Garfield is leaning against The Edge logo):

In Big, Fat, Hairy Deal you play the part of our
lasagna loving friend GARFIELD, off in search
of his beloved Arlene who has been captured
and imprisoned in the City Pound. This officially
licensed home computer game also features your
other favourite characters John, Nermal, and of
course Odie, and is a must for computer game
playing GARFIELD fans everywhere.
© United Feature Syndicate, Inc. 1988

Although this is officially the first game for the Garfield series, an unfinished prototype for a Garfield game was developed for the Atari 2600 in 1982 (but Atari did not want to pay for the license); it saw Garfield trying to save Nermal (an unusual concept, as he hated him in the strips and the show they later begat) by jumping from one fence post to another while eating flying hamburgers and avoiding bouncing flowerpots. Paws, Inc., (who now own the rights to the Garfield characters), have recently given permission for this incomplete game to legally be distributed as ROM image on their website.