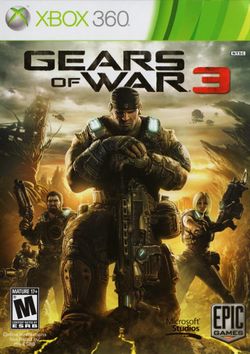 Gears of War 3 is a third-person shooter video game developed by Epic Games and published by Microsoft Studios exclusively for the Xbox 360. Originally due for release in April 2011, the game was delayed and eventually released on September 20, 2011. It is the third installment of the Gears of War series, and the final game in the current story arc.

Gears of War 3, like its predecessors, is a third-person shooter that emphasizes the use of cover and squad tactics in combat situations. The player's character can carry four weapons: one pistol, one set of grenades, and two other weapons, all which can be swapped with other weapons dropped by fallen foes or at stockpiles throughout the game. Most weapons feature a secondary fire mode; the game's signature rifle, the Lancer, includes a chainsaw bayonet that can be used at close range to slice through enemies. When the player reloads a weapons ammunition, they have an opportunity for an "active reload", shown by a small cursor moving over a line with a marked section on the player's heads-up display (HUD). If the player hits a control button when the cursor is in the marked section, they will reload faster with the resulting reload being slightly more powerful than normal bullets. If they press the button outside this section, this temporarily jams the weapon, leaving the player vulnerable. Alternatively, the player can opt to not try to for the active reload, reloading the weapon at normal speed. At times, the player can carry a heavier weapon, such as a mortar or gatling gun, which slows their pace while it is carried.

When in combat, the player can take some damage from enemy fire, filling a blood-colored "crimson omen" on the HUD as a measure of the player's health. By staying out of the line of fire, this will dissipate, but by taking too much damage, the player will become downed, and must be brought to their feet by an ally within a short "bleed-out" period, or else the player will die. The player can also be killed during the bleed-out by the use of an execution move by the enemy. Some types of damage, such as explosives or head shots, can kill the player immediately without the bleed-out period. Similarly, the player can also cause enemies to fall into bleed-out in the same manner. The player and their allies and enemies can use nearly any structure as cover, firing blind from behind it or leaning out to take aimed shots. Players can quickly switch between nearby covering walls or jump over lower cover to rush forward. Within Gears of War 3, some cover can be destroyed after taking some amount of damage, which can be used to a tactical advantage to draw out enemies from cover.

New to Gears of War 3 is the ability to tag enemy opponents; computer-controller allies will then concentrate fire on these marked enemies, while human allies will be alerted to their location on their HUD. Players can now also swap weapons and ammunition with other allies in the course of battle.

The player maintains an experience level that persists across all game modes. The player earns experience through kills, performing special types of kills, reviving and aiding teammates, and through general process of the campaign or competitive modes. Earning levels unlocks the use of special character skins and weapons within the game's multiplayer mode.