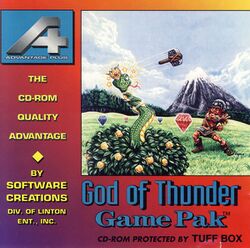 God of Thunder is a 2D puzzle game created by Ron Davis and published by Software Creations in 1993 as shareware (later released as freeware). The game chronicles the quest of Odin's son Thor as he tries to reclaim Midgard from Jormungand, Nognir, and his brother Loki. To help in his quest, Thor was given a mythical hammer, Mjolnir, that returns to his hand when thrown. 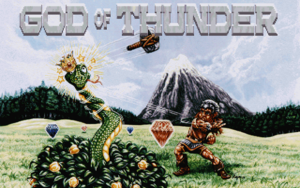 As Thor progresses, he must solve puzzles set before him by Jormungand, Nognir, and then Loki. He also has to fight his way through the countryside, past city guards, and into the lairs of the gods. Along with puzzles and action, role-playing elements are included. Thor slowly gains more powers as he progresses, and his hammer and armour can become stronger over time. Through the entire game, Odin watches over him, and Thor will find himself being yelled at by the king of the gods if Mjolnir fells an innocent person.

The game features tongue-in-cheek humor. A bridge repairman parodies Star Trek when he responds to a request for a dental bridge with "Dammit, Thor! I'm bridge and TV repairman, not a dentist!" Other examples of humour include countless references to sliding and non-stick surfaces in the second chapter, No Stick Nognir. The joke comes from Nognir's use of all of the male citizens in his area as slaves to mine Teflor (A take on Teflon). Stores also feature catchy slogans, such as "Andy's Armor Repair. You scuff 'em, We buff 'em."