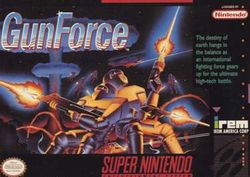 GunForce: Battle Fire Engulfed Terror Island (shortened to GunForce for the SNES box art) is a shooter game by Irem for the SNES that was released three years after the original Contra. This game was only released for the SNES, and its sequel, GunForce II, was released only for the arcade.

"The destiny of earth hangs in the balance as an international fighting force gears up for the ultimate high-tech battle." You are a commando sent to on missions destroy enemy establishments in hopes of fighting back an alien menace.