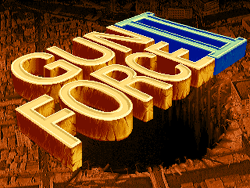 GunForce II (GeoStorm in Japan) is a shooter game for the arcade that was developed and published by Irem in 1994. It is the sequel to 1991's GunForce: Battle Fire Engulfed Terror Island.

Some of the music for GunForce II was Air Duel.

The game throws you into the role of a mercenary who's only goal is to rescue women from an onslaught of invading aliens. Your goal is to defeat five primary targets to sabotage all alien efforts.