You have crash-landed on Halo. Exit, take cover, and protect other Marines battling the Covenant.

You awake, dizzy and disorientated, you have bodies all around your crash zone. All the other marines are dead, you are the sole survivor. Head outside the Escape Pod and pick up all the ammo and grenades on the ground. Cortana will tell you that a Covenant dropship is inbound and that you should take to hiding in the hills. Pass the ravine and continue on the path. On the easier difficulties, you could take out the Covenant that come in the Dropship and the two Banshees, but on more challenging modes like Legendary, just skip this. You should come to a wide opening where several Grunts and Elites are waiting for you. Take them out and jack their weapon. Be sure to pick up the Plasma Grenades while you're at it.

You should eventually come to an area where several Covenant are being dropped off by another Dropship. They start shooting opposite your direction. What could there be? Snipe some of the Grunts with your Pistol (to zoom, press in the thumbstick). Head down the path, and you should come across some Marines. Help them out and kill off the Covenant.

You will be told to standby and help the Marines kill the incoming Covenant forces as an EVAC arrives. Four more dropships should come. Take all the Covenant out and stock up on any human weapons you need by the lifeboat. Be sure to pick up the Covenant's weapons.

Eventually you will be flanked on both sides by Covenant, but on the easier settings you should have no problem at all. On Legendary, you should toss a Plasma Grenade at any Elites you see. Plasma Grenades stick to all targets (that means allies, too, so be careful). If you need some health, there is some by the same lifeboat you received your extra ammo from.

After you have successfully defended the Marines from all four Covenant dropships, a Pelican (UNSC dropship) will arrive with a Warthog. Warthogs are your basic human land vehicle which can hold a driver (obviously), a passenger, and a gunner who uses the turret to take out any enemies. Some marines will hop into the Warthog with you.

Once you're in, drive the Warthog down the path and into the cave below. Keep driving until you hit a dead end, then take a left turn and jump over the narrow gap onto the next landing. Be sure not to fall off, or you may possibly injure/kill your fellow Marines.

Once you're on the other side, you will find yourself in a large dark area with a large gap that you must get over. There are several small structures on either side of you, and Covenant forces are patrolling this area in large numbers. One way to dispose of them all would be too just simply run them over while your gunner takes out anything you miss. This can be quite dangerous, however, as the Grunts LOVE to throw plasma grenades at your Warthog. Another way is to park on one side so your gunner can still shoot at Covenant, but get out and take out anything he misses. This way you will be able to avoid plasma grenades easier.

Once you kill all the Covenant, head to the right side of the room and go up the small path. There are some Red Elites hiding around here, so throw a frag grenade around the bend to injure, or hopefully kill, them. Keep heading up and you will eventually reach a control panel. Push X to activate the Light Bridge, to get across the gap. Now head back into your Warthog and manoeuvre your way outside the cave.

Good job, you have protected one group of Marines and have exited the cave. But, now can you save three additional groups of Marines from the Covenant? You're going to have to...

When you get outside, Cortana will tell you that more crew had made it off the Pillar of Autumn and that it is your duty to protect them until EVAC arrives. Go up the hill and dispose of these enemies. Head forward, then right. You should see some blue lights. Follow the path until you reach an area filled with large boulders. There are some Marines hiding somewhere up there. Drive to the right side of this area to pick up some ammo and switch out your Pistol (or otherwise lesser weapon) for the Sniper Rifle. Now, head up to the far right path until you get on top of the largest rock.

From here, several Covenant dropships will send in some Covenant troops. Take them out with your Sniper Rifle as they're boarding, then take out any survivors with your Plasma Rifle (you did pick one up, right?). After killing off the rest of the Covenant forces, you will signal in your the EVAC. The Pelican will come and your Marines will escape. Two down, two to go.

Enter your Warthog again and drive to the right side of this area again and take the small path up here. Keep going and you will see some more blue lights. Keep going and you will find yourself on the other side of the river where you exited the cave. Go to the right, cross the river, and there will be more blue lights. Go through them and you will be in an area where this structure is shooting blue beams in the air. Get out of the Warthog once the cliff starts to descend and whip out your Sniper. Take out some of the enemies, then get back in your Warthog and drive down.

Assist the Marines here in killing off the Covenant until an EVAC arrives. If you lost one of your Warthog personnel, then drive the Warthog next to a marine and they will fill in the empty spot. Find the lifeboat here and stock up on health, ammo and grenades. After that, leave this area and search for the final surviving group of Marines. 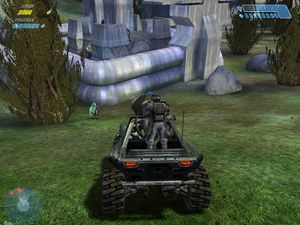 Marines are inside this building, the entrance marked by a yellow light.

Near the right side of this area, there is another path. It's by the lifeboat if you can't find it. Take out the Covenant down the path and you will learn that the Pillar of Autumn's crash site has been located and is being secured by Covenant. Take a right after exiting the path and go through this new set of blue lights. Take out some enemies from afar with your Sniper Rifle. Drive up to the nearest part of the structure and enter the only doorway marked by a yellow light. Take out any enemies you find and you will eventually team up with the Marines in this location. The EVAC will be called once you locate them. It will not come unless you defeat all the Covenant in this area, however, so do that quickly.

Cortana says she located Captain Keyes. He's being held prisoner onboard a Covenant ship. Enter the Pelican to complete this level.