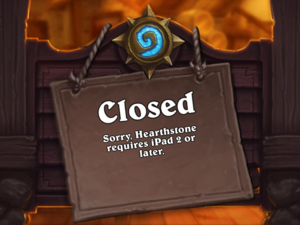 This is what is presented if you installed and try to run Hearthstone on an iPad 1, even with iOS 5.0 or later.

Hearthstone is entirely made up of 1v1 card battles. Players can face AI opponents to unlock classes and practice with their composed decks. Decks are made up of 30 cards. Each match begins with a random set of drawn cards, the ability to send back cards to draw new ones, and then one player is chosen randomly to have the first turn. One player is also randomly given an extra mana card, called "The Ring". Each turn, a player's mana pool increases by 1, cumulatively, until it maxes out at 10. Cards can be used to increase or reduce the number of mana available during a given turn.

Ranked play is separated into "seasons" that are three months long and follow economic quarters (Q1, Q2, etc.). Players begin at rank 25. At the end of every season, if a player has achieved rank 20 or lower they unlock a new card backing that can be switched in the options of the game at any time.

The game is set to release a single player adventure mode revolving around Naxxramas in summer or fall of 2014.