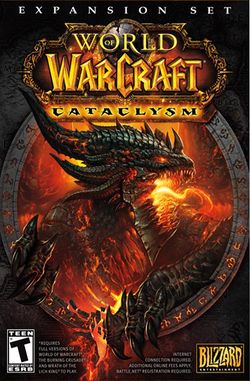 World of Warcraft: Cataclysm is the third expansion set for the MMORPG World of Warcraft, following the last expansion Wrath of the Lich King. It was officially announced at BlizzCon on August 21, 2009, although details were discovered earlier. After many rumors and much speculation, Blizzard officially announced the release date of December 7, 2010.

The central plot of the expansion is the return of the evil dragon Deathwing the Destroyer. Last seen in Warcraft II, Deathwing has spent the interim licking his wounds and plotting his fiery return from the elemental plane of Deepholm. His return tears through the dimensional barrier with Azeroth, causing a sweeping cataclysm that reshapes much of the world's surface.