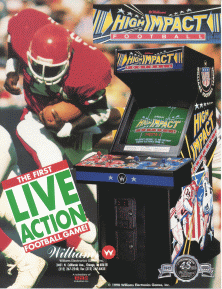 The players must use an 8-way joystick and a single button to control their currently-selected players - and there are over 40 offensive plays and defensive formations to choose from (including "Bombs", "Double Reverses", "Half-Back Options", "Nickel Defense", "Zone Coverage", "Stunts" and "Red-Dog Blitz"), making the game more complex than Midway's Pigskin 621 AD (which was released earlier in 1990 but it only allowed two players to play it simultaneously). The game also features cheerleaders, coaches, commentary by an insane play-by-play announcer called "Manic Max", and a crowd of fans who cheer or jeer at the players, based on their performance (the leader of whom is "Joe Six-Pack").