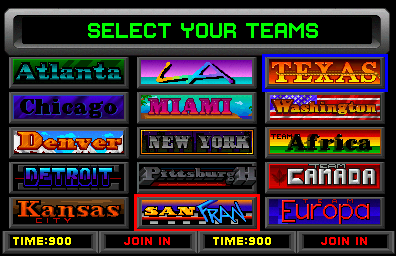 Once you have inserted your coins into the cabinet of Williams Electronics's 1990 American football arcade game High Impact Football and pressed one of the four Start Buttons the game will proceed to the team selection screen shown above as its opening theme starts to be heard from the Yamaha YM-2151; however, you may not select a team until all credits registered on the cabinet have been entered through subsequent presses of the Start Buttons (each credit registered is worth 100 seconds or 1:40 when entered, and the maximum of 10 credits for one player is worth 999 seconds or 16:39). If you run out of time, you shall have to insert another coin and press your Start Button within ten seconds in order to continue - and once all credits registered on the cabinet have been entered, you must push your joystick up, down, left and right to select the team you want to control (1P/2P's highlighter is red, while 3P/4P's is blue), then press your Action Button to confirm your choice. If at least one player is present on both sides of the cabinet, the text "COIN TOSS" will then appear on the screen, as a coin flies up into the air from the bottom of it, and you will either have to push your joystick up for "heads" or down for "tails" (indicated by the word appearing over your chosen team's logo); when it lands and stands up, the text "HEADS/TAILS IT IS" will appear at the bottom of the screen, and whoever won the toss receives first. However, if only one side is in use, the CPU team will be randomly-generated and your chosen team will always receive first (the Coin Toss will not happen if only one side is in use, on account of the fact it is also randomly-generated). 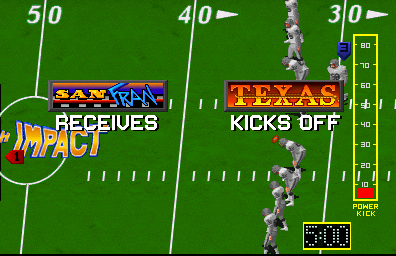 The two chosen teams' logos will then be displayed in the centre of the screen with the texts "RECEIVES" and "KICKS OFF" below them (depending on who won the Coin Toss!); the player(s) controlling the defense team must tap their Action Button(s) to build up the Power Kick meter on their side of the screen, which determines how far they will kick the ball across the field. When the ball is caught by a member of the offense team, the player controlling him (indicated by the red or blue numbered arrow over him) must use their joystick to direct him toward his opponents' end zone and their Action Button to make him jump - but as soon as he is brought down by a member of the defense team the two halves of the play selection screen will come into view from the left and right sides of it as its theme starts to be heard from the Yamaha YM-2151 (and you will be seeing this screen more than the field itself). 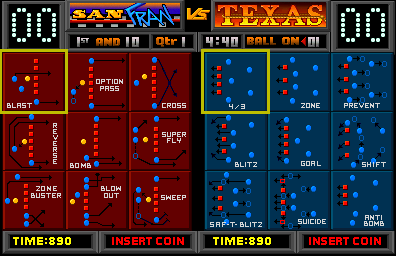 By default, the player(s) controlling the offensive team can select either: "Blast", "Option Pass", "Cross", "Reverse", "Bomb", "Super Fly", "Zone Buster", "Blow Out" and "Sweep" by pushing their joystick(s) up, down, left and right and pushing their Action Button(s) to confirm their choice, and the defensive team can select either: "4/3", "Zone", "Prevent", "Blitz", "Goal", "Shift", "Saf-T-Blitz" (pronounced: "Safety Blitz"), "Suicide", and "Anti-Bomb"; once all the players have done so (however, if only one side is in use the CPU will randomly select a play), both halves of the play selection screen will recede back off the left and right sides of it as the text "1ST/2ND/3RD/4TH DOWN AND XX/GOAL" (XX being the yard line's number) appears at the bottom of it and the members of both teams adopt the positions for the chosen plays. 1P and 3P can use their Action Buttons to pass the ball at the start of a play, while 2P and 4P can use theirs to switch control to the next available team member and the game will continue until a player on either team is brought down - however, if a pass bounces off a player's head, and another player doesn't manage to catch it, the text "INCOMPLETE PASS" will appear on the screen as the umpire appears in the top- or bottom-left corner of it. Also, if a member of the other team intercepts a pass the text "INTERCEPTION" will appear on the screen followed by "INTERCEPTION TURNOVER" with the two teams' logos and "DEFENSE" and "OFFENSE" below it; one of the coaches will also appear in the bottom-left, or bottom-right, corner depending on which team is now on offense. Finally, when a player gets brought down, any of the following texts might also appear on the screen ("Manic Max", the game's commentator, may also appear in the top- or bottom-left, for the second one): 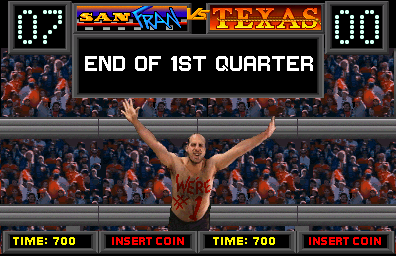 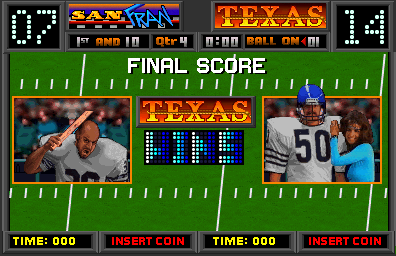 The game shall then display both of the teams' final statistics (points scored, passing yards, passing completions, passing average yards, rushing yards, rushing plays, rushing average yards, first downs, sacks, interceptions, fumbles recovered, human tackles, kicks blocked and injuries caused), with their salaries below them; if your salaries were high enough the game shall now go into "best-salary" mode. Your salaries shall most likely be the two highest ones on the cabinet to date, so you should enter your initials at the top of the table with pride, regardless of which way around they are positioned (each player can enter their own initials, but if one team's salary was not high enough to register on the "best-salary" table, the text "TRY A REMATCH" will be displayed on their side of the screen, although it's their choice if they want to play again). Once you've done so, the game will go back into attract mode.