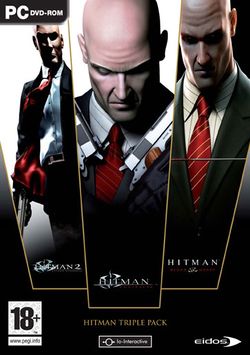 The compilation also includes a Kane & Lynch: Dead Men bonus disc with some special features. Note that Hitman: Codename 47 is the first game of the series and follows a significantly different game mechanic from its sequels. It has been omitted most likely due to the fact that it was only released for PC, as the trilogy pack was released for the PlayStation 2 as well. Also, it was not critically well received in comparison to the rest of the series, which, accordingly, was ranked more favorably. Hitman: Contracts can technically be called its remake as it features many of the same levels in a more realistic and darker tone, so that owners of the trilogy pack would not miss out on the highlights of the original game.