How to Be a Complete Bastard

From StrategyWiki, the video game walkthrough and strategy guide wiki
Jump to navigation Jump to search
How to Be a Complete Bastard | Table of Contents | Gameplay | Walkthrough 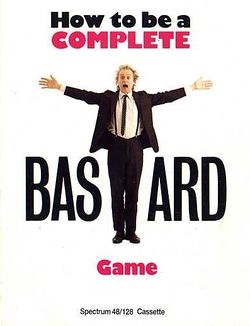 How to Be a Complete Bastard is an adventure game that was developed by Sentient Software for Virgin Interactive and released upon the Sinclair ZX Spectrum, Amstrad CPC and Commodore 64 in 1987; it is based on that 1986 book of the same name by Adrian Edmondson (who played Vyvyan in The Young Ones, and voiced the puppet of "Harold Angryperson" in one episode of Spitting Image).

Ade has successfully crashed a yuppie party on the posh side of town
and to succeed as The Complete Bastard he must incapacitate all the
guests by the end of the party and light up each letter in the phrase
COMPLETE-BASTARD. He must also build up as many Bastard Points as
he can by extremely offensive behaviour.
Ade must thoroughly search the furnishings and fittings (as any proper
Bastard would) and find objects that will enable him to play thoroughly
aggravating jokes on the guests and generally create havoc. Ade's antics
are viewed through a split-level screen and no opportunity to be a Bastard
must be missed in this truly illegitimate arcade game.
© Virgin Interactive Limited 1987

The main character of this game, "Ade the Bastard", is also a caricature of Edmondson himself, and just like in real life, he runs the risk of killing himself or being locked up for a long time if he behaves in a way which could be described as more psychopathic or self-destructive rather than "Bastardly".