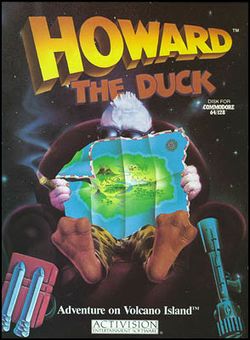 Howard the Duck is a 1986 video game published by Activision, and based as a spinoff of the movie of the same name.

Gameplay requires a joystick, with the exception of ZX Spectrum, where you can use cursor keys.

In the first stage, the following :

The other two stages use the joystick for movement, and the third uses the fire button to shoot.

The game consists of three stages, all three of which must be completed within a time limit. The timer counts down faster than normal (e.g. 1 second every 20 frames on the Commodore 64), meaning the 30 minute timer will finish within 10 minutes.

In the first stage, you need to traverse the island, stomping on all the mounds as you proceed. The map layout is as follows, being identical for all platforms: 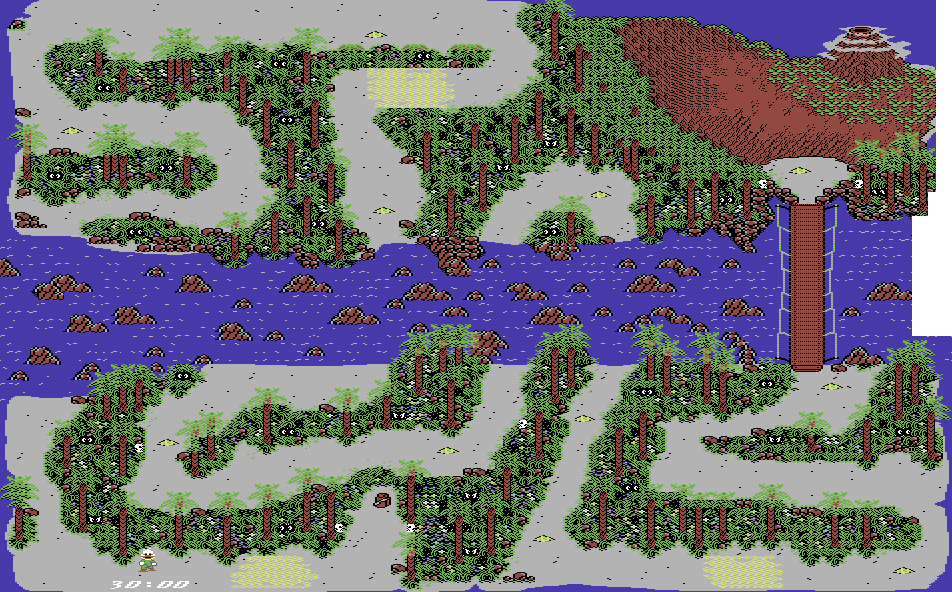 When you land on the island, first head right and jump over the slime. This leads to a backpack which contains the equipment you need to cross the water to the north. Backtrack, and cross the water by rapidly tapping the fire button while moving to the opposite shore.

You will soon see your first mound that spawns mutants. To defeat the mutants, you will need to attack them a few times to get rid of them, while approaching the mound before stomping on it. If you get attacked by more than one mutant, you need to hit each of them to make sure they are spinning, then attack the mutants to get rid of them.

Most of the stage is simply following the path until you reach the bridge. At the bridge, you will have to dodge boulders thrown down by moving to the side of the bridge. Some platforms (e.g. Commodore 64) may sometimes throw the boulder while you are near the end or even past the bridge, leading to an instant loss of life.

Starting this stage requires playing on Intermediate difficulty or higher, and it uses the same map as the first stage.

After crushing the last mound, you will use an ultralight aircraft, and need to head to the volcano at the top-right. The ultralight will first travel to the south-west until it reaches the bottom of the island.

Simply navigate your way to the volcano at the top-right corner. The ZX Spectrum version seems to make this easy, allowing you to take a direct route. In the Commodore 64 version, you may find it easiest to reach the top-left corner of the island first, then head to the right.

Starting this stage requires playing on Advanced or Expert.

After parachuting into the volcano, walk to the right onto the bridge. Rocks fall from the ceiling, damaging part of the bridge, and you will have to walk around any holes created by the falling rocks. There is a small gap between holes that you can use, but be careful when trying to reverse direction.

At the end of the bridge is the dark overlord. Shoot him three times (while dodging his attacks) to get rid of him. Once he's removed, head to the volcano switch and turn it off.

As a reward for completing the game, you are shown a medal displaying your rank and remaining time.