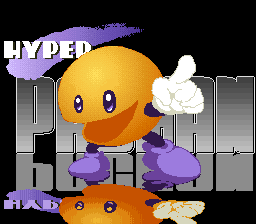 SemiCom's 1995 unofficial Pac-Man arcade game Hyper Pac-Man is divided into thirty stages; once you have inserted your coin(s) into the cabinet and pressed either (or both) of the Start Buttons, the letters S, T, A, G, and E will fall down from the top of the screen as the number 1 flies into view from its right side. The first nine stages' main theme shall then start to be heard from the Yamaha YM-2151 as one (or both) of the Pac-Mans materializes in his starting position, and the two blue ghosts start chasing him (or them) around the maze - and despite their colour, they are not always edible, which may confuse fans of all official games. When either Pac-Man eats a power pellet the game's "invincibility" theme will start to be heard from the Yamaha YM-2151, as the ghosts turn white; once they have been eaten, they will regenerate in their original starting positions shortly after (and if the power pellet is still effective, they will still be edible). As with the official Pac-Man title Pac-Mania (which also used a Yamaha YM-2151), the ghosts will start flashing in their original colour, when the pellet is about to wear off, but the "invincibility" theme will also increase in tempo (like Sonic the Hedgehog's did when he jumped on a Power Sneaker television after jumping on an Invincibility one); once the Pac-Mans have eaten all of the pellets between them (they don't have to eat all the bonus items), the text "STAGE CLEAR" will spiral down and up from the top and bottom of the screen, letter-by-letter, as the game's "stage clear" theme is heard, from the OKI MSM-6295. However, when the time for the current stage is down to ten seconds, the song you are hearing from the Yamaha YM-2151 will increase in tempo - and, if you can't eat all the remaining pellets between you, before it runs out, the text "TIME OVER" will spiral down and up from the top and bottom of the screen letter-by-letter, as the game's "time up" theme is heard from the OKI MSM-6295 (this will also cost both Pac-Mans a life, or the game if they only had one life remaining, as well as the effects of all special items they may have collected). The tenth, twentieth and thirtieth stages will also see the Pac-Mans fighting against an enormous mechanical bull, squid and evil Pac-Man which has three forms respectively (they will both also automatically have laser helmets with unlimited ammunition for these stages, but they will still die immediately if touched, and once they have fired enough shots at the bosses to make them explode their laser helmets will revert to normal ones for the next stage).