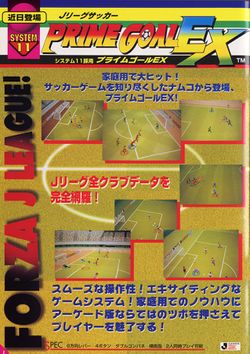 J-League Soccer Prime Goal EX (J-リーグサッカープライムゴールEX, lit. J-Rīgu Sakkā Puraimu Gōru EX), but commonly referred to as just Prime Goal EX, is a soccer arcade game, that was released by Namco in 1996 only in Japan; it runs on their System 11 hardware, and as its name suggests, it is the sequel to J-League Soccer V-Shoot, which was released two years earlier. The twelve original teams, the second of which (J.E.F. United) now has a secondary mascot (named "Unity"), all return - but this time, they are joined by two entirely new ones, Kashiwa Reysol and Cerezo Osaka (the mascots for which are named "Rey-kun" and "Robi". The players' names now also reflect the teams' 1995 lineups while an NS1-era World Stadium-style newspaper appears at the end of a match to report the results.