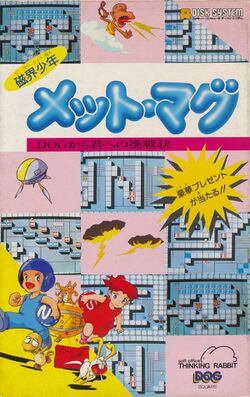 Jikai Shounen Mettomag (磁界少年 メット・マグ, Jikai Shounen Mettomag? lit. Magnetic Field Children Mettomag) is a puzzle game developed by Thinking Rabbit (the team behind Soukoban), and published in Japan for the Family Computer Disk System by Square in 1987. Apart from the title screen, the game is primarily in English, but it was never released outside of Japan.

The player must solve 100 puzzles in the form of rooms that contain magnetized squares. The player assumes either a North or South magnet polarity as he or she collects all of the polarity orbs in each room before attempting to reach the exit. The polarity of the player affects how he or she interacts with the magnetized squares which can enable or hinder the player in his or her progress through the level. The game can be customized for a male or female player. Choosing between the two will alter the look of the game to appeal more to one gender or the other, but will have no effect on the game play itself.