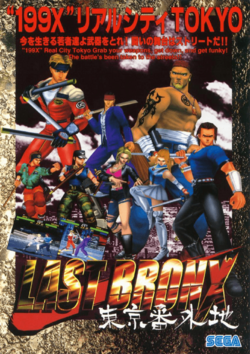 Last Bronx (ラストブロンクス -東京番外地-, Last Bronx ~Tokyo Bangaichi~?) is a 3D fighting game developed by Sega AM3 on the Sega Model 2 mainboard. This is one of the first motion captured weapon fighting game released in Japanese game centers in 1996, the other was Soul Edge.

Home versions of Last Bronx were produced for the contemporary Sega Saturn and Windows systems. In Japan, Last Bronx was novelized and serialized into comics and radio drama. A VHS video documenting the motion capture process used for the game and introducing the characters was released in 1996. A year later, Takashi Shimizu directed the live-action movie (V-Cinema). On June 29, 2006, Sega released Last Bronx on PlayStation 2 as a tenth anniversary celebration.

The Saturn version of Last Bronx was notable for keeping its 3D backgrounds unlike the Saturn ports of Virtua Fighter 2 and Fighting Vipers which reduced its backgrounds to 2D.

The Saturn version adds extra features such as new game modes and animated cutscenes for the intro and character endings. The extra modes added (Aside from Arcade and VS) are Survival, Time Attack, Watch mode (for watching CPU characters fight each other), Movie mode and Saturn mode which serves as the game's story mode. In Saturn mode, the fight order changes depending on the character you choose.

Arcade mode adds an 'Extra Stage' where ,after beating the mode without continues, the player fights a metallic mute version of themselves. Red Eye is also playable with his animated ending in the home versions.

An Interactive Tutorial 'Special Disc' was released for the Saturn version which has not been released overseas. It primarily serves to be a training mode for the game. It includes a voiced tutorial for specific characters cover the game's basics and specific combos. The voice clips change depending on the character you choose the tutorial for and the accompanying character. A Command List mode is also included to practice character specific techniques. There are also character introductions which are also voice, though the accompanying character selected is fixed.

The PC version is graphically on par with the Model 2 original with screen resolutions and graphic detail options available. Many modes from the Saturn port carry over to the PC version. Saturn Mode is now named PC mode. Watch Mode has been removed in favor of a new Replay Mode along with Team Battle mode and Network Battle. It keepings the command list training modes but not the voiced tutorials from the special disc.

The Playstation 2 version, as part of the Sega Ages collection, is a straight emulation of the arcade game with extra modes similar to the saturn port. No Watch mode, Saturn mode equivalent or Training mode were included. The replay mode could save replays in the PS2 memory card. You can also change camera angles in the mode as well.

A hidden bonus menu featuring exclusive options (that carry over to the rest of the game) is included in the PlayStation 2 version:

In the early 90s where Japan's Bubble economy had crashed, an alternate timeline of events form a post-apocalypse giving birth to a new wave of youth gang activity and violence on the streets of Tokyo during the economic depression. During the First All Tokyo Street war rose a gang called Soul Crew uniting the youth to end the violence among each other. The leader of Soul Crew would later be murdered sparking the Second All Tokyo Street war.

The game features eight gang leaders to choose from. All donning various elements of Japanese street fashion from the time and each carrying their own unique weapon.