Monty on the Run

Monty on the Run | Table of Contents | Gameplay | Walkthrough

Monty on the Run/Table of Contents 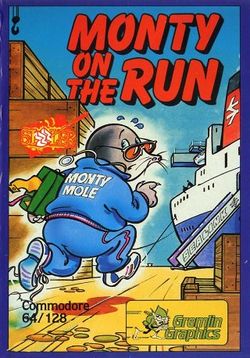 Monty on the Run is a computer game created by the software house Gremlin Graphics and released in 1985 for the Commodore 64, Sinclair ZX Spectrum, Amstrad CPC and Commodore Plus/4, written by Peter Harrap for the Spectrum with music by Rob Hubbard. The Commodore 64 version was produced by Micro Projects Ltd, joint owned by Anthony Clarke and Jason Perkins, with graphical input by Mark Rodgers and music by Rob Hubbard.

On the run from the authorities after his intervention in the Miners' strike, Monty the Mole must escape from his house and head for the English Channel and freedom in Europe. In traditional platform game fashion, along the way he needs to collect various objects and solve puzzles to complete his escape. Before the game, five objects must be chosen to form Monty's Freedom Kit. Choosing the wrong items will leave the player unable to pass certain screens. This also acted as an anti-piracy measure, since the objects were only given numbers onscreen meaning the player had to refer to the accompanying manual. The final screen sees Monty boarding a ferry to France. This was then the starting point for the follow-up Auf Wiedersehen Monty.

The game has a similar sense of British surrealness to Manic Miner and Jet Set Willy - in gameplay it is more similar to the latter. Enemies patrol every screen, water is deadly to the touch and Monty runs the risk of being squashed by the many pistons. The music for the Commodore 64 version is regarded as one of the best computer game scores for that platform. The main game theme was, according to Hubbard, inspired by "Devil's Gallop", the theme tune to the radio serial Dick Barton. It was rated #1 on Skytopia's list of The All-Time Top C64 Game Tunes.

In 1987, Jaleco released a significantly altered version of Monty on the Run exclusively in Japan for the Famicom Disk System under the name of Monty no Doki Doki Daisassou. The game itself bears very little resemblance to the original version. The only real association the game does have with the original is Gremlin's copyright and the familiar "in-game" theme playing on the title screen.

Monty on the Run/Table of Contents