This is the first game in the MySims series. For other games in the series see the MySims category. 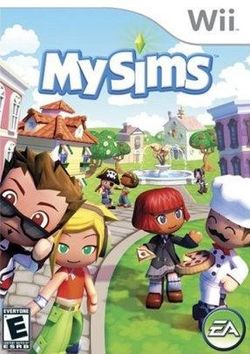 MySims is the first Wii entry in EA's The Sims series. It has sold more than 1 million copies. Two sequels have been announced, MySims Kingdom and MySims Party. MySims begins with a character moving into a run-down town with a mayor desperate to bring residents back. The player's job is to attract business and 'townies' back into town. Players build houses as well as furniture, and in return are given special decorations, blueprints and outfits for their Sim. As the town's population increases, new areas of town are unlocked in which even more people can be moved in. Eventually the town is bustling with citizens again.