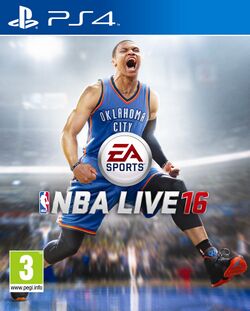 NBA Live 16 is a basketball video game for the PlayStation 4 and Xbox One which was released on September 29, 2015 in North America, simultaneously release with NBA 2K16 by 2K Sports and on October 1, 2015 in Europe. NBA Live 16 features Russell Westbrook of the Oklahoma City Thunder as its cover athlete.