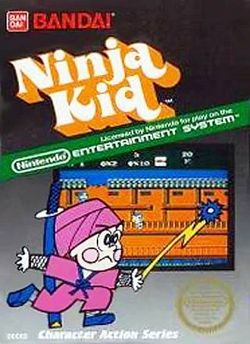 Ninja Kid is a NES platformer by Bandai. Like Chubby Cherub before it, Ninja Kid was originally a video game based on a popular Japanese manga and anime series that Americans had no knowledge of. So when the game was brought to the United States, any reference to the series that Americans would not understand was removed and replaced with a generic Ninja theme.

The original game, entitled Gegege no Kitarou: Youkai Dai Makyou, is based on the Gegege no Kitarou series of manga and anime. The subtitle (very) roughly translates to "Great Ghost Haunts of Wicked Men". Gegege no Kitarou is about a ghost; specifically, the last living member of a Ghost tribe. He is missing his left eye, but his hair usually covers the empty socket. He fights for peace between humans and yōkai, which generally involves protecting the former from the wiles of the latter. In this game, the first of many about Kitarou, he must stop several leaders from waging a war against humans. It was the eighth best selling Famicom game released in 1986, selling a reported 1,250,000 copies throughout its lifetime.

Ninja Kid is far more generic. You play as a ninja named Kyo in his quest to defeat the eight challenges of Shangri-La. Throughout each level, you must voluntarily explore different sections of an overworld in order to collect the item you need to gain access to the stage boss. You can also collect flutes which summon assistance when fighting the boss. The game has no ending; after defeating all 8 bosses, the game continues back at the first boss at a higher degree of difficulty.

How to play
Walkthrough
Retrieved from "https://strategywiki.org/w/index.php?title=Ninja_Kid&oldid=964122"
Categories:
Hidden category: