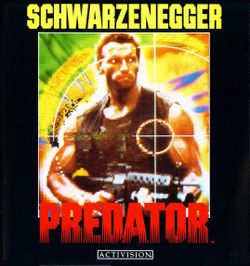 Predator is an action game developed for several popular home computer systems in 1987, and published by Activision, primarily in Europe, but also in the United States. On May 31, 1988, Predator was put on the "Index" (German: Indiziert) by the Bundesprüfstelle für jugendgefährdende Medien (BPjM). This made it illegal to sell or make the game available to minors in Germany, as well as making it illegal to advertise the game in any form.

It is a side-scrolling platform game based on the film of the same name. Predator is a side-scrolling platformer which uses the imagery and characters from the classic Arnie movie of the same name. The game is not a faithfully conversion of the movie however - your unit has already been killed off when the game starts and you will battle scorpions, enemy soldiers and dodge obstacles etc, before facing the Predator itself a number of times. The game is a fairly standard run-jump-shoot platformer, except that you start with no weapons at all and must collect them as the game goes on.