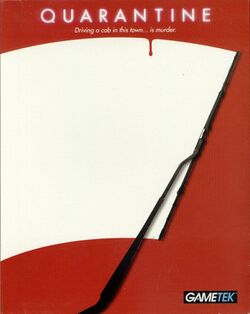 Quarantine is a first-person action/racing game developed by Imagexcel and published by GameTek in 1994 for MS-DOS and 3DO. It would later see an exclusive Japan release for the Playstation (February 16, 1996) and the Sega Saturn (June 12, 1996), though it was renamed to Hard Rock Cab and Death Throttle, respectively.

You play as Drake Edgewater, a taxi driver living in the year 2048 who desperately wants to escape from the walled prison-city of KEMO, currently plagued with a rapidly spreading chemical that turns its victims into psychotic killers. The entirety of the game takes place in Drake's hover cab as you drive around the chaotic city, defending yourself against the endless waves of armed citizens and reckless drivers. Along the way, you can pick up pedestrians who will pay you to get them to their destination within a limited time frame. Completing enough of these jobs gives you the opportunity to take on missions that will progress the story, which in turn will allow you access to new districts of the city upon finishing them all. Essential vehicle shops are scattered around the map that allow you to spend your money on upgrades to your ride, from an arsenal of weapons to better shielding.

Two versions of the DOS game were released - the original floppy version, and a CD version that featured FMV intro and ending cinematics, as well as 11 music tracks from Australian alternative artists.