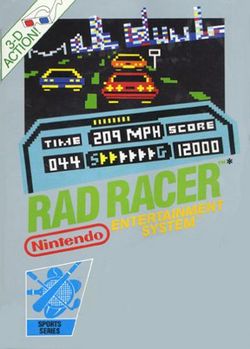 Rad Racer (ハイウェイスター, Highway Star?) is a racing game developed by and published by Square for the NES in 1987. By 1987, few racing games existed for the NES, and Rad Racer was seen as Square's answer to Sega's Out Run. It was programmed by Nasir Gebelli, designed and supervised by Hironobu Sakaguchi, and featured music by Nobuo Uematsu, all of whom later contributed to Final Fantasy in similar roles. Rad Racer is Uematsu's 15th work of video game music composition.

The idea of Rad Racer is to race around a course, and make it to check points before the fuel runs out. If a player hits another vehicle, road sign or tree at a high speed, the car crashes. Crashes take time and make it more difficult for the player to reach the check point. There are eight different levels of requiring increasing skill. Even if time runs out, the vehicle can continue to coast for awhile; if the vehicle reaches a checkpoint before running out of momentum, the game continues.

At the car selection screen, the player can pick one of two cars: a Ferrari 328 or an F1 racing machine, similar in appearance to the 1987 Lotus 99T Formula One car. Rad Racer came packaged with 3D glasses, which could be worn to give the player the illusion of three dimensions (Square had previously incorporated the usage of 3D glasses in 3-D WorldRunner).

The game appeared in an infamous scene in the movie The Wizard, where Lucas Barton (Jimmy's rival) uses a Power Glove to play through the first stage of the game, a feat in itself considering the much noted unreliability of the device. In 1990, Square followed up with an exclusive North American sequel, Rad Racer II.