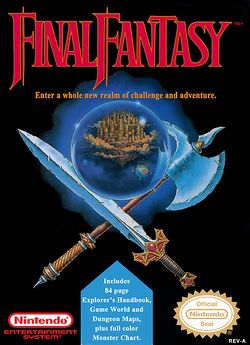 The story follows four youths called the Light Warriors, who each carry one of their world's four elemental orbs which have been darkened by the four Elemental Fiends. Together, they quest to defeat these evil forces, restore light to the orbs, and save their world.

The game received generally positive reviews, and it is regarded as one of the most influential and successful role-playing games on the Nintendo Entertainment System, playing a major role in popularizing the genre. Praise focused on the game's graphics, while criticism targeted the time spent wandering in search of random battle encounters to raise the player's experience level. All versions of Final Fantasy sold a combined total of two million copies worldwide by March 2003.