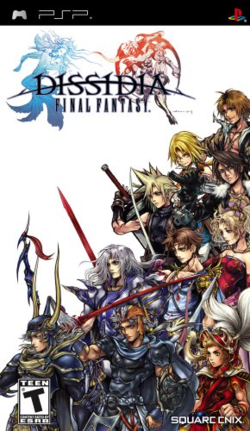 Dissidia: Final Fantasy is an action/fighting game released by Square Enix as part of the commemoration of 20 years of the Final Fantasy series.

According to the storyline, two deities - Cosmos and Chaos, representing harmony and discord respectively, have summoned the characters to do battle. They themselves, however, are being forced to fight by a great dragon known as Shinyru. Tired of the fighting, Cosmos takes matters into her own hands to try and end the conflict.

A 3D fighter, Dissidia puts players in the reins of memorable Final Fantasy characters - a hero and a villain from each of the ten numbered games.