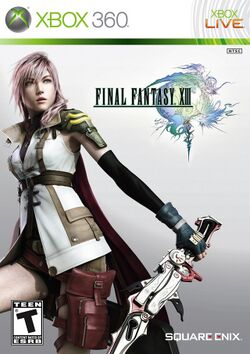 Final Fantasy XIII (ファイナルファンタジーXIII, Fainaru Fuantaji?) is a console role-playing game by Square Enix for the PlayStation 3 and Xbox 360 released in Japan on December 17, 2009 and in the US and Europe on March 9, 2010. The Xbox 360 version is not available in Japan.

The plot focuses on the fal'Cie, a race existing beyond humanity. The people marked by the fal'Cie for a greater purpose are named the l'Cie. Some thirteen centuries ago, a mythical Crystal told the fal'Cie to construct a paradise for humanity. The shell-like city of Cocoon was created to float high above the surface of the world now known as Pulse, and it was maintained by its own Crystal. Cocoon's Crystal created life forms and machines for its inhabitants to use, and humanity flourished. Over time, the people of Cocoon began to fear for the safety of their world, and were worried that it would be cast down from the sky. In present day, the wilderness of Pulse has strange effects on people, and the theocratic Holy Government of Cocoon quarantines and exiles anyone who has been influenced by Pulse from the city with the help of its mighty army, PSICOM. A former soldier of that army, a woman codenamed Lightning is chosen by the fal'Cie against her will to become an l'Cie, and with that to be an enemy of humanity and bring about the downfall of Cocoon.