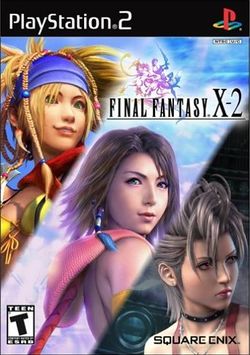 Although the game was not very successful when first released for Playstation 2, in 2014 Square Enix re-released a remastered version for Playstation 3, PlayStation 4, and Playstation Vita. It is available as a bundle package with Final Fantasy X.

For 1000 years Spira had been plagued with terror. War had broken out between Zanarkand and Bevelle. Sin, a monstrous beast, was summoned to put a stop to the fighting, however was now their punishment for using machina during these Great Wars. To temporarily bring a Calm to the lands, summoners and their guardians would set out on pilgrimages in search for Fayth to pray to for help them bring Sin down. In the end, sacrificing their lives to defeat the mighty monster. Yuna was such a summoner, however she and her guardians defied the teachings that were set in place, taking another approach. Successfully defeating Sin for what they prayed would be forever bringing on the Eternal Calm. The Fayth and Yuna's newly found love disappear.

It is two years later. Yuna is back at home in Besaid Village. Rikku brings her a sphere found by Kimhari that shows a man who looks and sounds like Yuna's lost love, Tidus. Could it be him? Yuna has to find out. She sets on a quest for more spheres to discover clues.