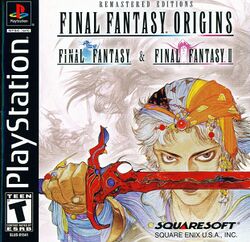 Released well after the PlayStation 2, Final Fantasy Origins was the third and final collection of Final Fantasy games to be ported to the PlayStation. At that point, all Final Fantasy games except Final Fantasy III were available on the PS1. It would also be the first time that Final Fantasy II was released in the US. The games contained enhanced graphics as well as a couple of FMV cutscenes. In a move that was both hated and loved by the fans, an "easy mode" was included, which reduced the strength of enemies, increased your party's strength, and reduced the amount of experience needed to gain levels. They also contained the "quick save" feature of the other compilations, allowing players to save anywhere.

Several years prior to Origins, a remake of the two games was done for the WonderSwan Color, however as the system was never released outside of Japan, the games were never localized. Origins is an enhanced version of these remakes.

Despite the numerous changes from the original, all of the important things - dungeon layouts, monster locations, characters, etc. are exactly the same. No dungeons have been added, removed, or modified. Classes are exactly the same with none added or any attempt made to balance them (this would come with Dawn of Souls).

In the end, it's still Final Fantasy, just prettier and with a lot of annoyances removed.