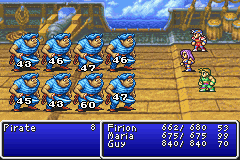 Make your way to Paloom. Once you enter the town, a lady named Leila will be standing by the entrance. She offers to bring you to Deist. Maria will be hesitant to accept the offer, but Firion assumes there is little alternative and will accept the offer. When you leave Paloom, Leila's ship will be docked along the east coast. Step on board and the ship will set sail. Along the journey, you will actually be set upon by Leila and the crew of pirates she commands.

You should be at sufficient strength that the battle against eight pirates should be a simple affair. When you win, Leila assumes you will end her life, so she is pleasantly surprised when you invite her to take on the empire with you. In return for sparing her life, she gives you control of her ship, to sail wherever you like. She will also join your party.

Leila begins the game equipped with a Sword and a Knife. She is the only character who is proficient with a Knife by default. She also has some mastery over Thunder magic, an important spell for anyone who is attempting to sail through the seas and might encounter some of the various water enemies who are weak to lightning attacks. 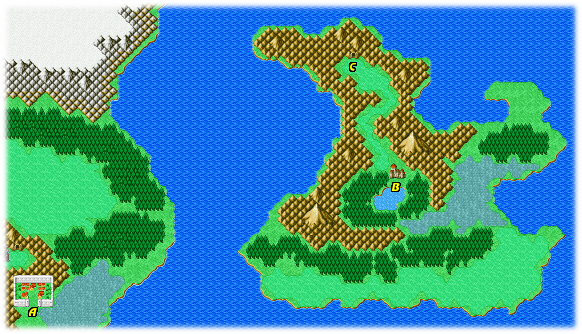 After the battle with the pirates, you are given control of the ship, which is now parked in the middle of the ocean, and you have very little to go on in order to find Deist. If you call up the world map (press

), you will see the world and your position in it. You are just above an island, and your destination is in the North East corner of the map, to the east of the snow cave and Salamand.

The safest way to reach Deist without getting lost is to travel east until you reach a coast line, and then follow it south until it leads you to an island covered by mountains along the north. Nestled in those mountains is the castle of Deist. Park your ship and journey across the island to reach the castle.

Upon entering Deist Castle, you will notice a little boy who warns you not to follow. Follow him anyway, despite his protests, and on the second floor, you will find him standing beside his mom. Speaking with his mom, you learn that the empire killed all the dragoons, and the mother and son are the only survivors. The room behind the contains the last living Wyvern, but without a pendant, they can't understand what it's saying. She informs you that a cavern is found north of the castle, and asks you to retrieve the pendant. 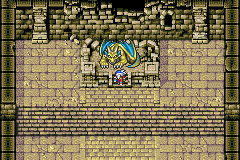 There is indeed a Wyvern resting in the room behind them, but much like the mother and child, you cannot understand what it is saying. Your next destination is the cavern, but before you do, take the time to explore the castle and retrieve the multitude of treasures strewn around in various rooms. You'll find a variety of status healing items, three spells, and a Wing Sword. 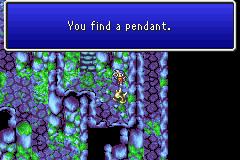 Head north from the castle to find the entrance to the cave. When you enter, head to the right towards the chest which contains some Gil. Continue right beyond the chest, and you'll reach a set of stairs. Take them down and you'll enter a small enclosure, in which you'll find the remains of a Dragoon. If you search those remains, you will find the pendant needed to communicate with the Wyvern. At this time, you should return to the first floor and exit the cave in order to return to the castle and speak with the Wyvern.

Back in Deist, the boy expresses concern that the Wyvern is about to die, and the mother informs you of the existence of the Life Spring, found deep in the Wyvern Cave. Enter the room of the Wyvern to speak with it, and it gives you a chance to ask questions. If you ask about Dragoons, the Wyvern tells you that a Dragoon named Ricard was attempting to find the Ultimate magic. If you ask about Wyverns, it provides you with the last egg of all Wyverns and implores you to get it to the Life Stream before it withers and dies. With that, it begins to succumb to the effects of the poison.

Taking the lower left stairs
This will set you on a path that ultimately dead-ends in the lowest level, and does not lead to the Life Spring. You will, however, find a number of powerful pieces of equipment along this path, so it's worth exploring. Upon reaching the second floor, head right, and collect the potion inside the chest along the way. You'll reach another stairway to the third floor which takes you through a small portion of the cavern. Climbing down to the fourth floor below, you must head left and then up to reach the opposite corner of the cavern until you finally reach the lowest level. Cross from the upper left to the lower right to find the treasure. The three chests grouped together contain a Flame Bow, Elder's Wisdom and Saint's Spirit. The isolate chest near the bottom contains Knight Armor, but is guarded by a forced encounter with a few Adamantoise, so make sure you can cast Blizzard before you try to collect it.

Taking the lower right stairs
This path will set you on track to find the Life Spring, but there are a few branches and a trap along the way. Down on the second floor, you must walk up along the right side of the cavern until it starts moving left to the center. Explore the various pockets to find two chests, one containing Mythril Armor, and the other containing a Mythril Helmet. A third chest closer to the right contains a Mage Staff, but opening it forces you into a fight with a few Green Souls. There are two stair cases here, one in the middle and one to the left. Take the one in the middle first. Down in the third floor, you'll see a bridge to the left and a path above. Ignore the bridge for now and explore the area above to find two treasure chests before the path dead-ends. In those chests, you will find Mythril Gauntlets, as well as the Mythril Mirror.

At this point, it's tempting to want to cross the bridge to explore the rest of the area, but the bridge contains a weak point. If you try to walk across it, you will be dumped down to the fourth floor along the path described above for the lower left stairs. Instead, return through the stairway you entered from, and walk over to the left staircase on the second floor to arrive back on the third floor on the opposite side of the bridge. A nearby chest contains a Mythril Shield. Collect it, and then walk up along the left side of the cavern, and then to the right along the top, then down the right to the staircase below. On the fourth floor, walk up and around to find a chest which contains an Acid Phial, then head down to the center to reach the staircase to the final floor below. 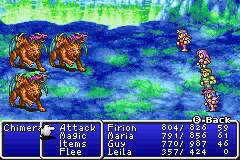 Down on the fifth floor, you must walk down and then to the right to discover four doors. Three of these doors lead to dead-end rooms from which you must escape. The third door from the left allows you to proceed to the path that leads to the Life Spring. However, when you arrive, a group of Chimeras, the natural enemy of the Wyvern, will be waiting for you to steal away the last Wyvern egg before you have a chance to deposit it in the Life Spring. You will engage in battle with anywhere from one to three of them at once. Chimeras have powerful single hit attacks, along with a breath weapon that can strike all party members, but they don't really require any major strategy to defeat them. Improve your party's chances by having someone cast Blink and Protect, and Cure members whenever necessary. Magic may be a little more effective against these creatures than weapons, depending on how strong you've become at this point, but use whatever powerful attacks you have at your disposal until they are defeated.

Once the Chimeras are gone, approach the spring and use the Wyvern Egg to drop it into the water in order to give it the chance it needs to survive and one day hatch. Once this is done, there is nothing left to do here, so either retrace your steps to the outside, or cast Teleport to leave. Return to Deist to learn of the last Wyvern's fate. It has passed away. The mother will express her gratitude for your efforts to deposit the last egg into the Life Spring so that it will become a mighty Wyvern. It is now time to return to Altair.