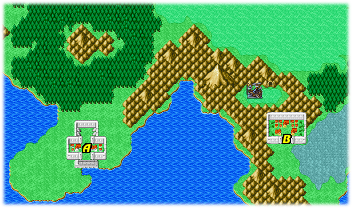 Hilda has tasked you with attempting to destroy the Dreadnought, or to delay its completion. The Dreadnought is being constructed around Bafsk, which is located to the right of Poft. Return to Poft, and then head north, east, and south around the mountain range that separates the two towns. Alternatively, you can hire a sailing ship to transport you there from Palm. 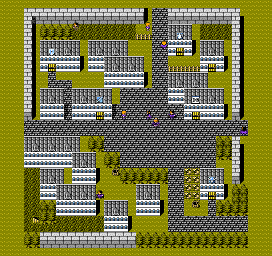 The situation in Bafsk is pretty grim compared to the other towns you've visited so far. General Borghen has taken charge of the town, and is forcing the citizen to work against their will. Borghen seems to lack the respect of the men under his command, but he also seems to be a lightweight compared to the Dark Knight who he replaced.

The shops in Bafsk aren't tremendously noteworthy, but the magic shop contains a lot of useful new White magic spells, including the status healing Basuna and Esuna spells. Remember to level them up as much as possible to unlock their potential and gain the ability to cure more and more status ailments.

If you talk to all the townsfolk, you will learn that one of the soldiers is actually a spy. Indeed, if you speak to the knight set off by himself in the lower left corner of town, he will identify himself, and indicate that there is a secret sewer entrance to the area where the Dreadnought is being built. Not wishing to arouse suspicion, he will get out of your way and give you access to the staircase.

Dungeon: The sewers of Bafsk[edit]

Enter through the sewers and start making your way around. Inside, you will encounter many familiar enemies, but they are stronger than the usual variety that you encounter outside, so be on guard. Watch out for Balloons, which explode for significant damage. If you wish to defeat the Balloons quickly, use the fire spell and target all of the enemies simultaneously. As you explore the first floor, you can find two chests containing a longsword and longbow.

When you reach the second floor, head to the right and follow the corridor to the end. Before you reach the exit, you will run into the dark knight, who was lurking behind the scenes the whole time. After he taunts you, he retreats and Borghen appears to tell you that you are too late. The Dreadnought takes off and commences its attack on the remaining unoccupied cities.

Return into the sewers and head right. In the small room, you can collect the Pass, and use the warp tile to return to the city.

Once again, you must return to Altair, only this time with bad news. As you travel back from town to town, the scene of devastation will be the same wherever you go. Note that if you're playing the PlayStation version, Final Fantasy Origins, be sure to unequip any items Minwu is carrying before speaking with Hilda. Otherwise, if you're playing a more recent version, make sure he's equipped with the best armor parts and with a shield.

Return to Princess Hilda to inform her of the Warship. Minwu will learn of the king's worsening condition, and choose to stay behind to ease his suffering. Speak with both Hilda and the King, and they will both suggest that you speak with Cid to discover if the Dreadnought has any particular weakness.