Improving the strength and abilities of the characters in this game isn't as straightforward as in the more mainstream Final Fantasy video games. There are no experience points in this game, but when you fight enemies and satisfy any of the conditions below, you will gain points in that attribute.

In the NES and PS1 versions, when an attribute increases several times, another one will decrease.

In Final Fantasy II, there are legitimate ways of increasing the level of your stats. However, in the Famicom and PlayStation versions of the game, there are also a few bugs which can be exploited to increase the likelihood that a stat increase will occur. The following are a list of actions that you can take to increase stats which may be unintuitive or unintentional.

Swap spell
Here's a great spell and it's available early in the game. Use it on a weak enemy and defeat it and you'll gain quite a bit.

Attacking party members
An unintentional but quick and dirty way to raise certain stats. This will raise the beaten up character's HP. Simply attack your other party members until they are in critical status. You can do this with magic as well to raise attributes associated with this as well, but there's an easier way. This was fixed in later versions of the video game.

Select/Cancel
Another unintentional cheat but excellent for raising your weapon level. Select a target, confirm, and then cancel when the next character's turn comes around. You can also do this for magic. This was fixed in later versions of the video game.

Unlike the first Final Fantasy, you can't reorder the way in which each of your playable characters is lined up. However, you do have the ability to instruct different characters to remain close to the front-line of battle, or take a step back to the rear. This has a couple of effects on battles. Characters that are close to the front are able to strike enemies with melee weapons, while characters who are set to attack from the back must use ranged weapons or spells. However, characters in the front are eligible for every attack from enemies, whether they are hand-to-hand or ranged, while characters in the back are only vulnerable to ranged attacks and spells. Do note that if the entire front-line falls, any character who is assigned to the back will be moved to the front-line. 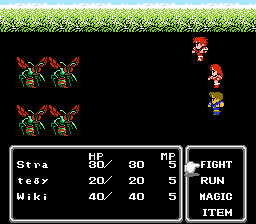 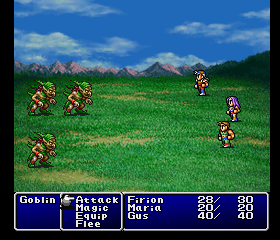 In combat, you are presented with your party on the right side and your enemies on the left. Before each round of combat, your characters step forth one by one and awaits your orders. After the warriors receive their orders, they carry them out while the enemy counter attacks. Combat continues until all of your enemies, or all of your party has been defeated, or until one of your party members successfully flees from battle. If either side is completely incapacitated by status ailments, the other side gets free rounds of attacks until at least one member recovers. If all of your party members are defeated, the game is over.

During battles, each character will have several options to choose from on their turn.