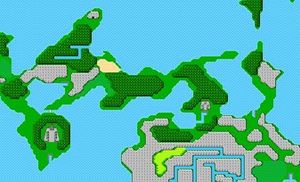 When you cross the bridge, you face a decision: head north to Matoya's Cave, or east to Pravoca. Matoya's Cave is optional at this point, but the detour is a good source of experience and you can raid her home for two Potions and an Antidote. If you decide to pay Matoya a visit, head back to Cornelia afterwards for healing, as the Ogres that guard her cave are tough.

Matoya's cave
The talking brooms
Although it seems as if the brooms are speaking gibberish, it's actually trying to tell you how to access the world map. After speaking with one of them, press

tap and hold the mini status window to bring up the map. Although it only shows the world in the original NES version, it gives specific information for places that you've already visited in later versions.

Once Sara is safe, a woman in Cornelia trusts the Light Warriors enough to tell them about Matoya, a witch who lives in a cave to the North. Once you cross the bridge to the continent north of Cornelia, you'll encounter some new, more dangerous enemies, particularly Ogres. Once your party reaches level 6, you'll be strong enough to fend off these monsters. Until then don't journey too far from Cornelia. Across the bridge, you'll reach a region of mountains that splits into two paths - north and east. If you go to the north along the rivers, you'll find a cave at the edge of the peninsula.

Make a stop at Matoya's Cave to collect two Potions (A and B) and the Antidote (C) from the chests. Then talk to a broom and decipher its cryptic message (see right). If you speak with the unhappy Matoya, you'll learn that her Crystal Lens was stolen and now she can't see very well. Naturally, she will be very grateful if you can find and return it to her. 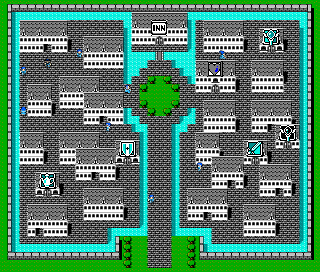 The traveller in Cornelia told you about his home in Pravoka where pirates roam and people hid in their houses. The road to Pravoka is long, so bring plenty of potions. If you arrive low on strength, stay in the inn before speaking with Bikke and his gang of pirates in the northwest corner of town—you'll be forced into a battle once you talk to them. From the town's entrance, walk directly north to find the Inn.

Hit the regular spots in town to upgrade your weapons, armor and magic. Magic is expensive in Pravoka, so choose wisely which spells to buy first. Invis is the most useful level 2 white magic spell. Use it to raise a party member's Evasion during battle. Silence is also worth picking up—it is effective against spellcasting bosses later in the game. From the level 2 black magic shop, purchase Blizzard. It is a good elemental attack against enemies weak to ice.

In Pravoka, you must face an army of pirates to restore peace. Their captain Bikke will not be pleased to find four armored and experienced warriors on his turf, and he'll sic his crew on you. Nine pirates swarm to attack. The pirates aren't very strong, especially compared to the enemies outside of town, but with nine of them, one party member could lose HP quickly if the pirates gang up on him or her. Each pirate can sustain only about 10 HP of damage, so your entire party should be able to defeat them in hand-to-hand combat. Cast Sleep to incapacitate a good number of them, and then pick them off one by one.

Once you've freed Pravoka from the pirates, you'll find Bikke is still in town. Talk to him, and he'll admit defeat and offer his ship as penance for his wrongdoing. The townsfolk will reappear, feeling that it is once again safe to walk on the streets. They have a lot to say, too, about the Elf Prince and the special herbs that Matoya can make, and also about the town of Melmond.

The ship will be waiting for you in the harbor just outside of town. When you're ready, step onto the ship to set sail. Travel the open waters to get your bearings, and use Thunder spells on the enemies that you encounter at sea. If you had trouble affording level 2 magic spells, sail around and battle sea monsters until you have enough money. Return to Cornelia for an easy dock and a cheap inn stay, then head due south to Elfheim.

Around this time, you may feel that your efforts to obtain Gil are proceeding slowly, given the enemies that are available to fight in the area surrounding Pravoka. There is an alternate and effective means of obtaining Gil quickly in the region known to players as the "Power Peninsula." However, this area is extremely dangerous, and should not be attempted before your party reaches approximately level 10.

To find it, head east of Pravoka (on foot) until you see a port, then North past the port until you reach a dead end. The top four squares on the tip of the peninsula contain very powerful enemies: Winter Wolves, Hill Gigas, Trolls, Necrotaurs and Wyverns. You should be very careful because all of these enemies can hit hard, often too hard for your current level.

If you manage to win these battles, you'll usually get between 500-900 experience and 2000-3000 Gil. Spells sold in Elfheim can substantially aid you in battle here. If you continue to return here until you reach level 15 or so, most of the enemies will become easier to kill. Early on it's an extremely good idea to head back and save after each successful battle, but as you level up you'll be able to survive multiple battles in a row.