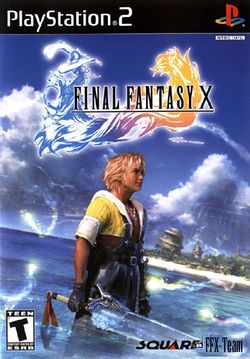 Final Fantasy X is a RPG developed and released by Square Enix for the PlayStation 2 in 2001. It marked a few key milestones for the venerable Final Fantasy series. It was the first in the series to move away from static sprites or pre-rendered graphics, presenting the entire game in a real-time 3D environment. It also featured voice acting, adding further to the cinematic experience. It was also the first in the series to spawn a direct sequel, Final Fantasy X-2.

Tidus waits with his allies outside the ruins of an ancient city. He narrates the events that led to the present, spanning most of the game's storyline. It begins in his home city, the high-tech metropolis of Zanarkand, where he is a renowned blitzball player and son of the famous blitzball star, Jecht. During a blitzball tournament, the city is attacked by an immense creature that Auron, a man not originally from Zanarkand, calls "Sin". Sin destroys Zanarkand and takes Tidus and Auron to the world of Spira.