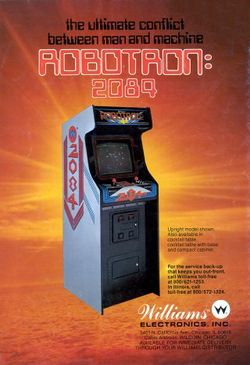 Robotron: 2084 was another classic arcade game designed by Eugene Jarvis, creator of Defender and Stargate. Robotron is the spiritual successor to Defender. Instead of protecting humanity up in the sky, players participated on the surface to take care of the invasion of robots that threaten the remnants of humanity. Robotron's game play was partially inspired by Berzerk.

Robotron was notable for its special control set up. The player controlled the game with not one, but two joysticks, one in each hand. One joystick controls the player's movement while the other controls the gun, allowing players to move and fire in completely separate directions. It comes in handy because you generally find yourself running away from a swarm of robots while firing behind you to eliminate them. For bonus points, you must attempt to rescue many of the humans that you find wandering throughout each wave.

As usual for many of Williams' popular arcade games, Atari picked up the rights to bring the game home. Due to the unique control configuration, two options were generally provided. Either the player could literally hold two joysticks and play like the arcade game, or one joystick could be used, sacrificing the ability to fire and move in different directions. Robotron was released for download on the Xbox Live Arcade in 2006 with fairly enhanced graphics. Robotron's game play was a direct inspiration for William's '90s arcade hit Smash TV. 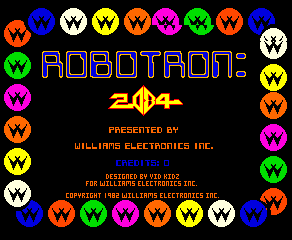 Inspired by his never ending quest for progress, in 2084 man perfects the Robotrons: a robot species so advanced that man is inferior to his own creation. Guided by their infallible logic, the Robotrons conclude: The human race is inefficient, and therefore must be destroyed.

You are the last hope of mankind. Due to a genetic engineering error, you possess superhuman powers. Your mission is to stop the Robotrons, and save the last human family: Mommy, Daddy, and Mikey.