Ruff and Reddy in the Space Adventure 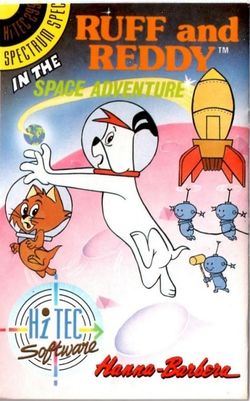 Ruff and Reddy in the Space Adventure is: a platform game, which was developed by Twilight and PAL Developments for Hi-Tec Software, and released upon the Sinclair ZX Spectrum, Amstrad CPC, all Atari 8-bit systems, Commodore 64 and Commodore Amiga in 1990; it is based upon the very first Hanna-Barbera cartoon, The Ruff and Reddy Show (which originally aired on U.S. television in 1957).

This is from the back of the cassette's (or disk's, for the case of that Commodore Amiga version) inlay card, the front of which is shown in the image to the right (Ruff and Reddy are fleeing the Lilli-Punies):

Ruff and Reddy have agreed to test Professor Flipnoodle's Pocket
Rocket. At blast off, something goes terribly wrong and the rocket
spins wildly out of control, heading off into deep space.
It crash lands on a planet inhabited by small blue aliens known as
Lilli-Punies. Some of these have decided to go exploring on a nearby
planet and have become either lost or captured.
The Lilli-Punies kidnap Ruff and Reddy and tell them that the only way
to regain their freedom is for Ruff to go and rescue all the missing
aliens.
Without much of a choice the Lilli-Punies take him to the planet where
their friends are.
THE SEARCH BEGINS!
© Hanna-Barbera Productions Inc. 1990