Sam & Max Beyond Time and Space/Episode 203: Night of the Raving Dead

In Sam & Max Episode 203: Night of the Raving Dead, Sam and Max return from Easter Island only to find their neighborhood is infested with shambling zombies. A call from the Commissioner confirms there is a zombie epidemic, and it's up to the intrepid dog and bunny crime-busting duo to figure out what's going on.

You start out in a serious predicament, with a malevolent fiend about to crush you to death in a spiky contraption. Since Max doesn't remember how he got there, Sam begins to tell him the tale in the form of a playable flashback. It all started back at the office, just after you returned from Easter Island in the last episode. As Max enjoys his bath in holy water, a zombie enters the office and steals Jesse James' hand at the same time as the Commissioner calls to inform you of a zombie attack originating from somewhere called The Zombie Factory. You'll need to locate this source of soulless abomination production to find the source of the attack.

Take a look around your office like usual, then check in with your friends around the neighborhood. You'll find that Jimmy Two-Teeth has opened a rats only casino in the empty robot hull, Sybil is looking for the perfect rebound guy after her breakup, and Stinky is annoyed with Abe, who just sits at a booth feeling sorry for himself. The only ones with some information on The Zombie Factory's whereabouts are the COPS at the garage at end of the street. It turns out there is a high concentration of zombies in Stuttgart, Germany, which you can now reach in the DeSoto.

You'll soon find when you try to get inside that your old friend Superball has been hired to guard yet another door you want to open. In this case he doesn't have anything against you specifically, but there is a long line ahead of you and it's not moving very fast. If you could find a way to clear out the line, you'd be first through the door at the next opening.

With the line out of the way, you're free to enter, but remember to dump anything with garlic or holy water into the trash container by the side of the door beforehand. 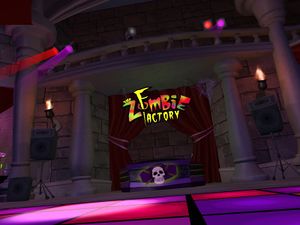 Welcome to The Zombie Factory.

Inside The Zombie Factory, you find that it's a raver nightclub being run by an emo vampire named Jurgen, who is also the one creating all the zombies. He doesn't seem much worried about your plans to destroy him, as his zombie army is very loyal to him. If you talk to him a little, you'll find that the source of his power is his incredible style. It's always wise to remove a vampire's power before trying to kill him, so that's probably where you should start. In order to do so, you might like a little reminder about the things vampires hate:

First, try embarrassing Jurgen in front of his zombie friends while he's dancing with an impromptu suntanning session.

The zombies' confidence in their master's style is shaken, but you'll need to do more yet.

There's only one item in the episode containing garlic, so it shouldn't be too hard to figure out what you're supposed to use for this puzzle. Unfortunately, Superball won't let anything damaging to vampires into the club, so you'll have to find another way to use it on Jurgen.

You're even closer to totally discrediting Jurgen with his zombie horde, so it's time to put the final nail in his coffin.

Not only do you need to find some holy water, but you'll need to find a way to sneak into the castle and make Jurgen drink it. If you were paying attention to the beginning of the flashback, you might remember a clue that will help you. If you can embarrass Jurgen one more time in front of the zombies, he might lose his influence over them.

That is Jurgen's final straw, and he's forced to retreat through a secret elevator in the fireplace to get away from the disapproving audience. After him! 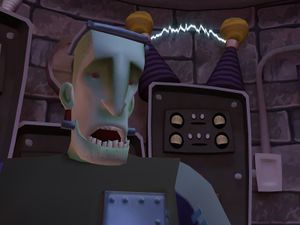 Totally unprepared to fight a vampire with your bare hands, you find yourselves trapped in the soul sucker machine. That's the end of the flashback, but you spent so much time remembering how you got there you didn't formulate a plan to get out. The machine slams shut on you, and you find that you are dead. Luckily it was a shallow grave, and you're back in the land of the living outside the castle, but now you're zombies. As zombies, normal people can't decipher your grunts and moans, but you will be able to talk to other zombies. People you know will still recognize you (as zombies), so you can still go to different places and interact in a limited fashion.

In order to bring yourselves back to life, you should probably investigate the scene of your murder and look for clues. Head inside and back up the fireplace to Jurgen's laboratory. You can explore the place now that Jurgen's sleeping in his magically sealed coffin, and you'll soon find that he's been working on bringing a monster to life. Flip the power switch to animate the conglomeration of body parts and you'll be able to talk to Jurgen's monster. He's a sad fellow, but if you've talked with Sybil about her search for a new man and the soul mater on her desk, you think she might be the perfect match for him.

If you try and take Jurgen's monster to see Sybil, you'll have to put some body parts in him first. Once Sybil has three suitors in her office, she'll start a battery of questions to determine who is the most compatible. None of the answers your monster provides goes over very well, likely due to him having the wrong parts installed. If you want to get the soul mater from Sybil so you can get your lives back, you'll need to turn the monster into Sybil's Don Juan so she doesn't need it anymore.

Sybil likes smart, well-spoken men, so you'll want to use the brain of someone with intelligence and loquacity. Zombie Lincoln's brain would be perfect, since Sybil already fell for a Lincoln once. However, Flint Paper won't let you near the brain, so you'll need a way to sneak up on him.

With brain in hand, head back to the laboratory and outfit the monster with a personality certain to charm Sybil.

The first time you go back home after being zombified, you may have noticed Jesse James' hand escaping the thieving zombie and running into Stinky's. When you go in there, you'll see it has tied Stinky up and is holding the place hostage with a big gun and the quickest trigger finger this side of the Mississippi. A hand that skilled would look great on your monster!

Just like the brain, return to the lab to give it to the monster. Now he just needs a proper heart.

The last piece your monster is missing is his heart. Sybil has very strict requirements on the heart, as she will explain if you bring the monster to her shop and have her ask some questions. You'll need to find something very special to satisfy her.

With your monster properly outfitted with the best body parts, he should be a shoe in for the dating game. Take him back to Sybil's and have her run through the questions so he wins the contest. Unfortunately for the monster, Sybil realizes she really just misses Abe and runs off to patch things up with him. Things didn't work out well for the monster, but at least you take the soul mater now.

Race the soul mater back to the laboratory to get your souls back. There's a little mix-up however, and the souls accidentally get switched. Sam ends up in Max's body and vice-versa. Additionally, Jurgen has woken up and is ready to kill you again. You'll need to find a way to defeat him and also get your souls back into their proper bodies.

With Jurgen defeated and Sam having regained his soul, all is well in the end. Case solved!

The driving game this time around is a new take on the classic Paperboy. Instead of delivering papers to houses, you will be direct marketing SOL to denizens of the zombie neighborhood. While driving down the street, you can toss the CDs out the window and they will describe a gentle arc to their target. Depending on how far away from a zombie you are, you will need to give the CD more or less of a lead. It's much easier to hit zombies that are right outside your window than it is to time the large lead needed to hit a zombie right next to its house from the middle of the street. The easiest way to complete the delivery quotas is to drive closer to upcoming zombies and hit them with the disc when they're right next to you.

There's no shooting this time, just driving and running things over. You can also switch the side of the street to which you're delivering by driving to that side of the street. For completing all the zombie delivery goals and hitting all the special items, the COPS will reward you with a flame job on the front of your car. You'll know you're done with the zombie deliveries when your goals start incrementing by one more than the best you've done so far.